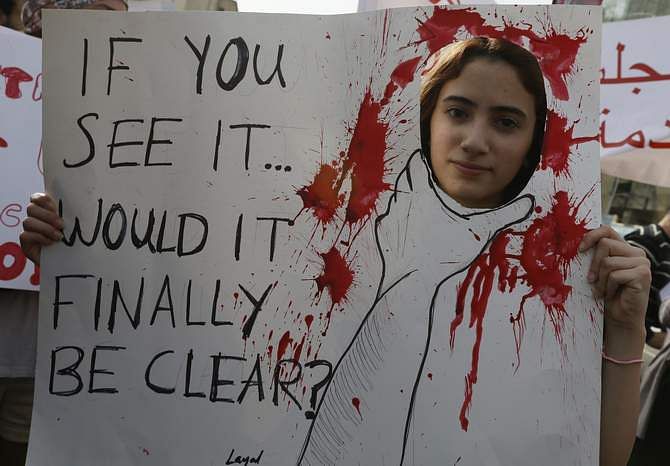 An activist holds a banner during a march against domestic violence against women, marking International Women's Day in Beirut March 8, 2014. Photo: Reuters

Thousands of people have marched through Beirut to demand politicians in Lebanon pass a law against domestic violence.

The rally, which coincided with International Women's Day, was led by relatives of victims.

Lebanon is viewed as the one of the most liberal countries in the Middle East, but has no law protecting women from violence by family members.

The new bill has languished amid stiff opposition from religious figures.

There are no national statistics on domestic violence in Lebanon.

But campaigners say one woman is killed by her husband every month on average, while thousands are subjected to physical or verbal abuse every year.

Protests marched through the streets of the Lebanese capital on Saturday carrying posters reading "Break the silence", "We say no to abuse, do you?" and "Speak out. Stop domestic violence".

The proposed bill on domestic violence has polarised politicians, and was amended by parliament after lobbying from Lebanon's powerful religious establishment.

Many campaigners want the changes reversed so the bill focuses on women and includes a move to criminalise marital rape.

A number of alleged domestic violence killings in the past year have drawn renewed attention to women's rights in the country.

Her mother, Nada Sabbagh, said she saw her daughter being killed.

"I walked in and started jumping in shock then begged him to let me take her out," she said.

While there is no law against domestic violence, a rapist can escape punishment if he marries his victim.

Ghassan Moukheiber, an MP and a member of the parliamentary Human Rights Committee, said he hoped the draft bill would be unanimously approved once parliament meets.

"I look forward for the voting of this bill because it is going to be a very important and meaningful step toward stopping all sorts of violence against women and other members of the family that could be subject to violence."