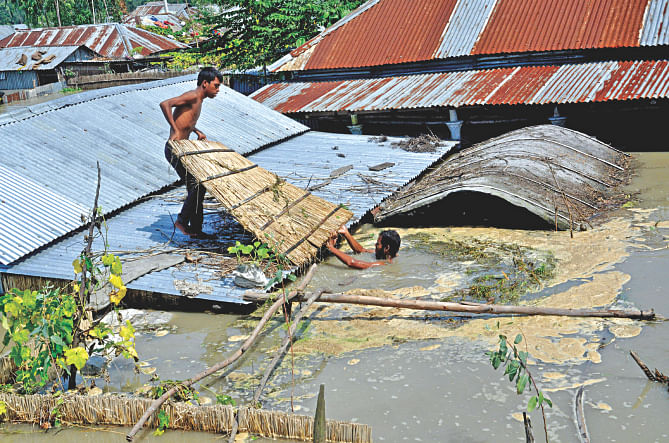 Flood affected people of Rohodoha area in Sariakandi upazila, Bogra are moving whatever they can from their inundated houses. The photo was taken on Saturday. Photo: Star

With more villages having gone under water, inundated over the last 24 hours, the number of flood affected people has reached 20.67 lakh, officials of the Department of Disaster Management (DDM) said.

This is the first time the government has given an estimate of the victims since the floods had begun in different parts of the country a little over two weeks ago.

Meanwhile, the water levels of the Jamuna and the Teesta rivers have started subsiding, marking a slight improvement in the flood situation in the northern districts. But the Jamuna and the Ghagot were still flowing above the danger level.

However, flooding in the central region is likely to deteriorate in a day or two, warned officials of the Flood Forecasting and Warning Centre (FFWC).

Though a large number of people in the flood-hit regions continue to reel from no or scant relief assistance, the disaster management and relief minister yesterday claimed there was a good stock of relief materials in the affected districts.

“The affected districts will get necessary relief support within 24 hours of placing their demands to the ministry,” Mofazzal Hossain Chowdhury Maya said while visiting flood-hit Ulipur upazila in Kurigram.

So far 3,510 tonnes of rice have been distributed among the affected people across the country, said Iftekharul Islam, director (relief) of the DDM.

Persistent floods and the resultant erosion have washed away homesteads, roads, schools and thousands of hectares of croplands.

But an estimate of the damage was yet to be made, he said.

Around 350 families in Kurigram became homeless due to erosion by the Teesta, taking the number of victim families to 3,732 in the district.

Md Abdul Gafur, chairman of Jatrapur union in Chilmari upazila, said, “The intensity of erosion increases once the floodwater starts receding. So, the erosion here might get worse within a few days, I fear.”

In Bogra, 30 more villages went under water yesterday, raising the number of flood affected villages to 200 in the district since an embankment in Sariakandi had collapsed three days ago.

Some 37 villages were affected in Sherpur due to rise of the Brahmaputra river, reports our correspondent.

A portion of the Chandpur town protection embankment faces the risk of collapsing as several holes appeared in the embankment and concrete blocks had been sinking since Saturday night, said Mafizul Islam, an official of the Bangladesh Water Development Board in Chandpur.

The local administration has asked shop owners near the embankment to move away and police have been deployed in the area to keep the curious mob at bay.

A vast area of Munshiganj district was inundated yesterday as the Padma kept rising. Disruption of the ferry services on Mawa-Kawrakandi route continued due to strong current of the river, creating tailbacks on both ends.

With the floodwaters receding, waterborne diseases were spreading in different areas of Jamalpur.

Fifty-three people were admitted to different hospitals with diarrhoea in seven upazilas, 13 with respiratory tract infection, 11 with eye infection and 37 with skin diseases, according to the Jamalpur civil surgeon's office.

Civil Surgeon Dr Hafizur Rahman said, “Waterborne diseases have not broken out in an epidemic form yet. However, our medical team is ready to deal with any emergency.”

Meanwhile, the FFWC yesterday forecast that the flood situation in the capital and some other districts, including Shariatpur, Madaripur, Munshiganj, Manikganj, Rajbari and Faridpur, may continue to deteriorate.

Except for the Padma, all major rivers, including the Brahmaputra, the Jamuna, the Ganges and the Meghna, may continue to subside, said Sazzad Hossain, deputy director of the FFWC.

The water level of the Jamuna (Brahmaputra in India) has gone down in India, which confirms an improvement of the flood situation in Bangladesh, said an FFWC official.