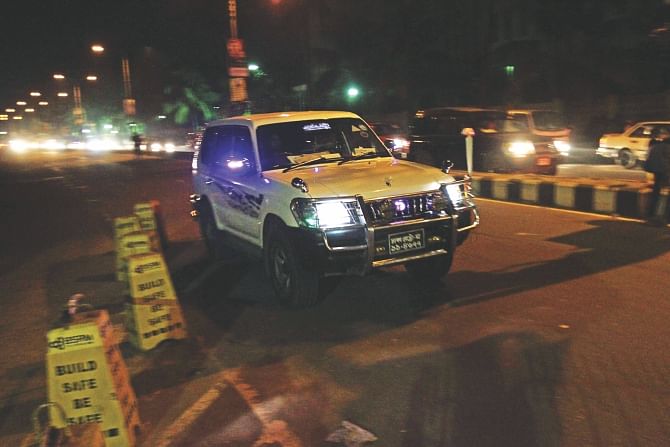 A car driver takes the wrong side of the street in front of Ruposhi Bangla Hotel in the capital yesterday evening, even after the High Court's directive on the government to ensure that such practices be stopped. photo: SK Enamul Haq

The High Court yesterday directed the government to ensure the enforcement of traffic rules so that vehicles of influential people do not get to take the wrong side of streets with impunity.

The suo moto rule came on the very day The Daily Star published a report headlined “Influentials on the wrong side” with a photograph of a minister's motorcade travelling against traffic near Ruposhi Bangla hotel.

Pointing out that influential quarters tamper with and violate traffic regulations in Dhaka city with impunity, an HC bench said, “All citizens are equal before law and are entitled to equal protection of law. No one should escape the toils of the law with impunity, however highly placed he may be.”

The court also sought explanation from the government in four weeks as to why it should not be directed to enforce traffic laws strictly to prevent influentials and highly-placed people from using the wrong sides of the streets of Dhaka.

The bench of Justice Moyeenul Islam Chowdhury and Justice Md Ashraful Kamal made home secretary, inspector general of police, commissioner of Dhaka metropolitan police and its joint commissioner (traffic) respondents to the rule.

They would have to submit a report before the court on November 27 on the steps taken to comply with the HC directives.

The Daily Star report points out that traffic police and even a minister appear helpless in preventing government high-ups from driving on the wrong side of Dhaka streets.

Traffic policemen on the ground continue to overlook vehicles taking the wrong side of roads saying the rules violators are influential people and they may face serious repercussions if they penalise them.

Referring to the report, the HC judges said, "It is common knowledge that some VIPs and VVIPs are using the wrong sides of various streets of Dhaka city without caring for the relevant traffic rules, thus compounding the problem of traffic congestion in this over-populated mega-city.

“All citizens, irrespective of their status and position in the society must abide by the relevant traffic rules, failing which, serious traffic tangles and accidents may take place taking a heavy toll on human lives.”