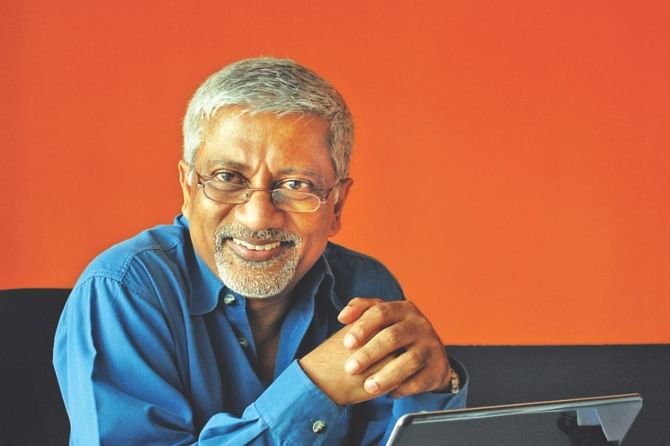 Data analysis and its use can be instrumental in making policies, plans and decisions. Call detail records (CDR), which contain information about all the calls passing through a telephone exchange, can give an idea which areas in a city are prone to traffic congestion, or where economic activities are extensive.
This is why, 'big data' can help governments in township planning or allocating public services, said Rohan Samarajiva, the founding chairman of Colombo-based ICT think-tank LIRNEasia.
Researchers can use real-time data from mobile networks in analysing what happens when one road is closed or another opens in a different time of the day for traffic management, Samarajiva told The Daily Star in an interview in Dhaka recently.
Also, understanding people's regular mobility patterns through telecom data helps model the spread of infectious diseases such as dengue or Ebola so that the government can allocate its limited resources to battle the disease outbreak in a certain area.
Big data are extremely large data sets that may be analysed to reveal patterns, trends, and associations, especially relating to human behaviour and interactions.
“Mobile networks' big data is unbiased as everybody comes under the census,” Samarajiva said.
Big data can be characterised by three words -- volume, velocity, and variety -- and requires new forms of processing to enable enhanced decision making, insight discovery and process optimisation.
Samarajiva said big data can be obtained from CDR that gathers all information of a caller, including his position, duration of a call, the unique number of his handset, and
so on.
LIRNEasia has recently completed a project, which used data from telecom networks in Sri Lanka to generate patterns related to population movement that showed concentration of people in a city at any given time of the day.
The think tank used data generated from mobile usage to create heat maps that showed, for example, how Colombo draws people from the surrounding suburbs during work times.
Samarajiva said the mapping can be done both in urban and rural areas.
The number of residents in Colombo is only 550,000 and an equal number of people come to the city in daytime from the neighbouring provinces. Before the research, people used to think that all of them were residents of Colombo.
"Now we can say how many people come to the city and where they come from. The numbers are very useful for urban planning."
Calling patterns, movement of subscribers, CDR and information from base stations can be used for the research, he said.
"We ensure that no data will be disclosed and the legal departments of the operators check everything. The operators can give us the data and we do not work with any personal data," he said.
Samarajiva, who was the director general of Sri Lanka's telecom authority, said LIRNEasia is the only research organisation in South Asia or developing countries that is working on mobile big data.
"Now we want to work in Dhaka. It's one of the most interesting cities in the world. It is a very densely populated city. Everybody will want to know how it runs."
Samarajiva said they also plan to go to India and Bhutan for such researches. "We have developed relationships with the world's best universities who will provide us with researchers."
He said a lot of people are now talking about big data, but the current models of data analysis do not cover all the people, especially the poor. Mobile networks' big data can be used to reach this segment, he added.
Big data can give organisations access to more data than they have experienced before, and thus give them the opportunity to discover data correlations and patterns. Access to more accurate information can influence their business in many ways.
Businesses and organisations will feel more confident when making business choices and important business decisions. This can help companies improve marketing strategies, increase customer base and gain a competitive edge.