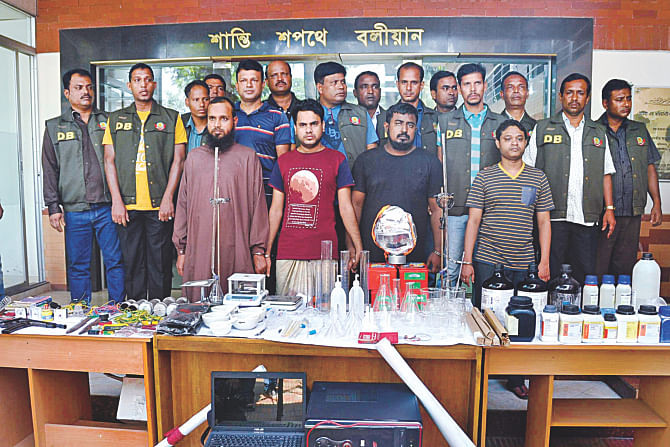 The four Huji suspects shown to the media at the DB head office on Minto Road yesterday. The law enforcers also seized explosives and materials for making bombs from their possession. Photo: Star

Banned Islamist militant outfits of the country have united under a common platform -- Bangladesh Jihadi Group -- with plans to launch attacks in major cities and on eminent personalities.

“We have got some documents that confirm the formation of the new jihadi platform,” said Monirul Islam, joint commissioner of Dhaka Metropolitan Police, at a press briefing at the DMP media centre.

Jamaatul Mujahideen Bangladesh (JMB), Hizbullah, Allahar Dal and Hizb-ut-Tahrir are the other members of the umbrella organisation.

The arrestees maintained connection with outfits like Ansarullah Bangla Team and Hiz-but Tauhid that are not banned yet, Monirul said.

During the raids, detectives also unearthed a laboratory facility at Fatullah. The Huji men were using the facility to make "powerful bombs", Monirul said.

"Huge amounts" of explosives and materials for making detonators were recovered from their possession, he said, adding that at least 300 powerful detonators, which are used to trigger an explosion, could be made with the recovered materials.

At one point, Monirul also said that the arrestees were working on instructions of Moulana Abu Syed alias Mufti Zafar, an accused in August 21 grenade attack case, who is now in jail.

Despite several attempts, the DMP official could not be reached for further comments on this.

Among the detainees, Rafique is the operational leader while Omar, a final year student of Chemistry Department at Prime University, is an explosives expert. Omar was running the lab with the help of Nadim and Salauddin, Monirul said at the press briefing.

“The Huji recruited Omar when he was a sixth grader and wanted to prepare him as an explosive experts,” said the senior DMP official, claiming that the militants had plans for simultaneous bomb attacks in Dhaka, Chittagong and Rajshahi this month.

“They were also planning to attack some noted personalities,” he said, adding that the militants also wanted to attack recently expelled Awami League leader Abdul Latif Siddique for his derogatory comments on hajj and Tablighi Jamaat.

In primary interrogation, the arrested four said they had no problem with funds but did not disclose the sources. “We will come to know about the sources of funds and explosives in further quizzing,” Monirul said.

The arrestees were presented before the media but police did not allow pressmen to talk to them.

About India's claim of Bangladeshi militants' involvement in some recent bomb blasts in India, Monirul said they were yet to find any such link.