“Even we die, we won’t boycott polls,” he says after meeting with CEC 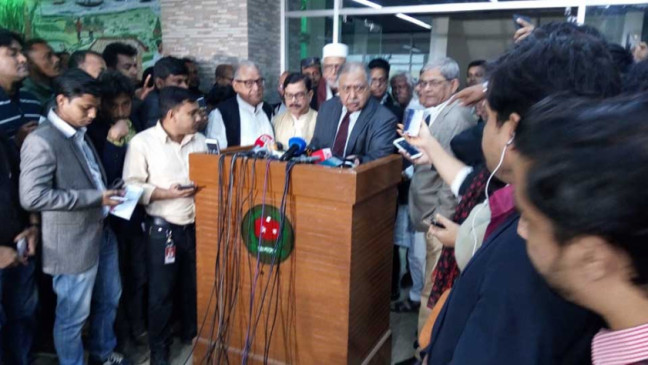 Jatiya Oikyafront key leader Dr Kamal Hossain today called upon the Election Commission to take legal steps within a day or two to stop the mass arrest of opposition party men and attack on them.

Kamal Hossain also Gono Forum president made the demand while holding a meeting with Chief Election Commissioner KM Nurul Huda at the commission’s Agargaon office in Dhaka this afternoon.

While talking to reporters after the meeting, Kamal said if the government thinks that the Oikyafront would boycott the election in the face of the ongoing attacks, then it will be wrong.

“Even if we die, we will not boycott the election. You (Oikyafront supporters) should go to the polling station carrying my dead body if needed to vote,” Kamal expressed his determination.

Alleging that the CEC is not exercising his constitutional power, vested upon him, fully, Kamal said he requested the commission to come up with directives to the law enforcement agencies for stopping the attacks being continued on the opposition party men.

The top brass of the Oikyafront met the CEC and discussed the country’s current political situation ahead of the upcoming parliamentary election.

He also submitted a letter citing facts over mass arrests and filing of false cases against the alliance leaders, activists and supporters.

Jatiya Oikyafront top leader Dr Kamal Hossain today warned that the county's situation may take a serious turn anytime if obstacles are created to hold a fair and credible election.

"I would like to warn that if an obstacle is created towards holding a fair election and any move is taken to retain power by force, the country's situation will take a serious turn which is not acceptable to anyone,” he said while releasing the alliance's manifesto at a city hotel.

"Please uphold the force's reputation that you've gained and taken steps to stop the indiscriminate arrest of opposition activists just 10 to 12 days before the national election," the senior politician urged the Inspector General of Police (IGP).

Claiming that a total of 1900 leaders and activists were arrested across the country, Dr Kamal said it is a matter of national shame.

WHAT IS JATIYA OIKYAFRONT?

The Oikyafront was formed on October 13 with the demands of a national election under a neutral government after dissolution of parliament and release of BNP chairperson Khaleda Zia from jail.

Jatiya Oikyafront Convener Dr Kamal Hossain yesterday called upon the voters to go to polling centres early in the morning and cast votes without fear.

“I urge the voters to go to polling stations early in the morning and cast ballots. Don't be afraid. If you go there, criminals will flee. They cannot withstand the people's strength,” he told a press conference at Dhaka Reporters Unity (DRU).

Replying to a query, the eminent jurist hoped people would vote for the Oikyafront candidates if today's election is held in a free and fair manner.

“If you talk to people, they will tell you that they want a change. We hope and believe that people will vote in our favour.”

In a statement distributed at the briefing, the Gonoforum president called upon the young first-time voters to exercise their franchise.

“Keep in mind that if you are afraid, you are done; if you turn around, you are Bangladesh.”

Dr Kamal claimed that there are apprehension and confusion among people over the polls, and said this needs to be removed immediately.

“The polls will be held as the day breaks. There should have been a festive atmosphere now across the country. Instead, there are worries and confusion in people's mind.”

Dr Kamal, an architect of the country's constitution, called upon members of the army, the navy, police, Rab, Border Guard Bangladesh, Ansar, the VDP and Coast Guard to play a glorious role in the election like in the past.

“Your role in peacekeeping is being praised worldwide, and this has increased your scopes across the globe. You will remain careful so that it is not hampered in any way.”

“If you violate anyone's rights, remember that someone else is violating the rights of your mother, father, wife and children. If you do that, people, history and the law will not forgive you.”

Pointing to government employees, he said they do not belong to any party, and they serve people. “People are the owners of the country. Don't deprive them of the joy of casting votes.”

He also urged public officials not to abide by “any unlawful order”.

Responding to a query, the jurist said there is no division among the components of the Oikyafront. “Rather, our unity has been strengthened.”

About recent attacks on a number of Oikyafront candidates, he said, “I never saw or heard about such attacks and oppression in my life.”

He also reiterated that they would not quit the polls under any circumstances.

Speaking at the briefing, BNP Standing Committee Member Nazrul Islam Khan claimed that till Friday, 11,506 Oikyafront leaders and activists were arrested since the announcement of the election schedule on November 8.

He also alleged that Oikyafront men faced at least 2,896 attacks that left nine people dead and 13,252 others injured.

Later, Dr Kamal and other top Oikyafront leaders held a view-exchange meeting with foreign journalists at the DRU.

He briefed them about the attacks, cases and arrests of Oikyafront leaders and activists from November 8 to December 25.

The Oikyafront leader alleged that 2,833 attacks were made on the opposition men by Awami League men and police. At least, 12,923 people, including 49 Oikyafront contenders, were injured.

“Instead of being a time of festive competition, the campaign trail turned into a nightmare. The election road is pitted with serious obstacles, threats, intimidation and violent attacks against the opposition men,” he said.

Gono Forum, led by Dr Kamal Hossain, yesterday demanded that steps be taken to free the transport sector from political influence and laws be properly enforced to restore discipline in the sector.

The party came up with the demand at a press conference at Jatiya Press Club in Dhaka.

“Political influence not only helps corruption spread but also make people indifferent to law. Ultimately, the rule of law is hampered. It is applicable for all sectors, including transport,” said Dr Kamal Hossain.

The main reason behind the prevailing anarchy in the transport sector is lack of good governance, said the eminent jurist. “It's necessary to ensure impartial and effective enforcement of laws to ensure good governance.”

Dr Kamal, also the convener of Jatiya Oikyafront, said police must enforce laws so that the goal for which these are framed can be achieved. But if the police are influenced by anybody then they become weaker, and deviate from the rule of law.

Gono Forum will form a human chain in the capital on April 1, to push for its 14-point demand to ensure safe roads, and restoration of discipline in the transport sector.

The programme, which will be held in front of Jatiya Press Club, is also meant for registering the party's protest against the government's move to hike gas tariffs.

“We took to the streets demanding safe roads earlier when students waged a movement to this end. We're also going to form a human chain from 3pm to 5pm in front of Jatiya Press Club on April 1 with the same demand in line with the students and youths,” he said.

Through the programme, Montu said, they will also protest the fresh proposal for raising gas tariffs.

He urged the people of all walks of life, including students, to participate in the programme.

The party also demanded security on the roads in front of public and private hospitals, installation of footbridges and speed-breakers on roads in front of educational institutions, a stop to extortion in the transport sector, creating a fund supervised by a regulatory body for victims of road accidents, and taking suggestions from experts and giving priority to people's interests in constructing roads and bridges and working out transport strategies.

Terming the prevailing trend of robbing the state wealth as horrible, Jatiya Oikyafront today said that the country and its sovereignty will plunge into a severe internal crisis if it is continued.

“It is now proved that the undemocratic government has pushed the country to the verge of collapse only to take the state power under its absolute control through indulging in irregularities and corruption,” Oikyafront said in the context of the ongoing crackdown on the casino and illegal business.

In the statement, Oikyafront demanded the resignation of the present government and called upon it to announce a national government to uphold the country’s independence and sovereignty.

The Oikyafront, in the statement, also said that holding of a national dialogue with political parties and professional bodies will be the time buffeting step to resolve the prevailing crisis.

It also demanded the formation of a national commission to probe the government’s indulgence in criminal activities including abduction, killing and enforced disappearance and corruption.

The Oikyafront also demanded the immediate release of BNP Chairperson Khaleda Zia and other political parties’ leaders from jail.

He said Dr Kamal, also the president of Gonoforum, might go to Thailand from Singapore for medical purposes.

Dr Kamal Hossain today called upon all to take to the streets to bring down the government instead of just holding indoor meetings.

“No more indoor meetings. We will unite and take to the streets to keep the movement going,” said Dr Kamal Hossain, Jatiya Oikyafront convener, while speaking at a meeting demanding BNP Chairperson Khaleda Zia’s release on the occasion of the second anniversary of her imprisonment.

The meeting was organised by Oikyafront at Dhaka Reporters Unity.

Khaleda was sent to jail after a lower court sentenced her to five years’ imprisonment in the Zia Orphanage Trust graft case on February 8, 2018.

He said they are tolerating a farce in the name of election. “Unelected people usurped power and are ruling the country. People will not accept that,” said Dr Kamal, also president of Gonoforum.

The Jatiya Oikyafront top leader said that if people are deprived of freedom they become victims of corruption and looting. “None can give autocracy an institutional shape. People who had tried faced dire consequences,” he added.

He said that celebrating 50 years of independence, while depriving people of their rights, is nothing but a farce.

Speaking about Khaleda Zia, Dr Kamal Hossain said, “The term political prisoner sounds strange 48 years after independence. It is unimaginable that demand of release of Khaleda Zia need to be placed and meetings are held for that.”

BNP standing committee member Abdul Moyeen Khan urged all to unite and wage a movement to oust the government.

Jatiya Samajtantrik Dal President ASM Abdur Rab at the programme cautioned the government that if they want to leave power peacefully, they have to release Khaleda Zia.

Oikyafront leader and Gonoshasthaya Kendra trustee Zafrullah Chowdhury opined that it would not be wise to take part in the any elections without the release of Khaleda Zia.