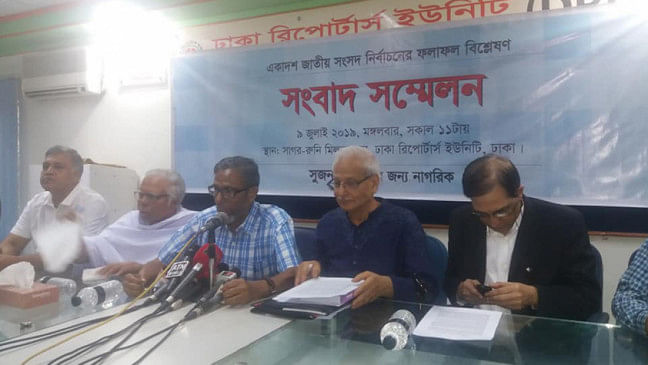 Lots of accusations of irregularities have surfaced centring the national elections, Dilip Kumar Sarker, central coordinator of Shujan, said at a press conference.

Shujan organised the conference at Dhaka Reporters' Unity to brief media about the outcome of its findings on election results.

"After evaluating the polls results, we found out that 100% votes were cast in 213 polling centres of 103 constituencies, which is unbelievable," he said.

It also founds 100% votes were cast to a single symbol in 587 polling centres of 75 constituencies.

“We urge the president to form a Supreme Judicial Council in order to probe the irregularities and take actions against those involved, specially the election commission," Shujan Secretary Badiul Alam Majumdar said.

"In the whole history of the elections across the world, I have never heard of 100% votes being cast at an election," noted Journalist Syed Abul Maksud said.

Shujan President Hafiz Uddin also demanded a Supreme Judicial Council in this regard.

In the election held on December 30, 2018, the Awami League-led grand alliance secured 289 seats, while the Oikyafront got only eight seats.

Almost 82 percent of the lawmakers for the 11th parliament have assets worth more than Tk 1 crore, civil society platform Shushashoner Jonno Nagorik (Shujan) said in a report yesterday.

Of those MPs, 32 percent have assets worth more than Tk 5 crore, according to the report unveiled at the Dhaka Reporters Unity in the capital.

According to finance ministry sources, only 0.06 percent of the total population of Bangladesh was valued at more than Tk 1 crore in 2016.

The report also mentioned that 1.34 percent of the MPs had not submitted their wealth statements in their affidavits.

It further showed that 61 percent of the next parliament is made up of businessmen and their number in the Jatiya Sangsad was increasing.

It is a dangerous sign that the county's politics is going into the hands of businessmen and wealthy people, Shujan Secretary Badiul Alam Majumdar said at the programme.

Political analysts have said the major political parties' dependency on businessmen had effectively turned the politics into a business.

Lawyers, businessmen and farmers were the three most common occupations of the lawmakers elected to the country's first parliament in 1973.

However, in the fifth parliament, constituted through the election of 1991, businessmen outnumbered lawyers, with 38 percent being businessmen and 15 percent lawyers.

On a more positive note, Badiul Alam said it was a good sign that educated and taxpaying citizens were being elected as MPs.

Only four percent did not pass the SSC exam.

It also said that seven percent of the lawmakers were now facing at least one case, while 45 percent had cases filed against them in the past.

As the recent Khulna City Corporation elections were marked by “peaceful rigging”, there is no scope to term it free, fair and flawless, Shushashoner Jonno Nagorik (Shujan) said today.

“We feel the Khulna City Corporation elections were a questionable one,” said Dilip Kumar Sarkar, central coordinator of Shujan said at a press conference at Dhaka Reporters Unity.

People’s credibility and confidence that the Election Commission had gained following the Rangpur City Corporation elections is found missing in the KCC elections, Dilip Kumar added.

For some candidates the KCC polling atmosphere was fearful even though there were no noticeable incidents of violence or cases of mass irregularities, Sujan said at the conference.

This is why, voter presence was very low, only 62.19 percent, he said.

Election Commission had no control over the law enforcers, said Shujan President Hafiz Uddin claimed while speaking at the conference.

Almost 10,000 law enforcers were on the field, there was a lot of preparation but still in many cases fake votes were cast in front of police personnel, he added.

Awami League mayor candidate Talukder Abdul Khaleque won the Khulna City Corporation polls held on May 15. The elections were marred by irregularities such as heavy showdown by the ruling party in and around polling stations, ballot stuffing and driving out polling agents of rival group.

Shushashoner Jonno Nagorik (Shujan) today urged the Election Commission (EC) to take stern action against contestants of the next parliamentary elections if they provide false information in the affidavit.

Shujan also demanded action by the EC if any candidate conceals information in the affidavit.

Shujan Secretary Badiul Alam Majumdar placed the demands at a press conference at the Dhaka Reporters Unity auditorium in the capital this afternoon.

In a written statement, Shujan urged to incorporate five additional provisions in the affidavit.

The civil body during the press conference strongly criticised a political party, without mentioning its name, for proposing the EC to scrap the provision of submitting affidavit by the candidates.

The early announcement of the polls schedule and decision to use Electronic Voting Machine (EVM) has created uncertainty regarding the fairness and acceptability of the election, speakers said at a programme yesterday.

They also urged the main opposition party BNP not to boycott the upcoming election despite the current spree of “political arrests”.

“We want not only a peaceful election, but also a fair one… Restriction on political activities, Digital Security Act, spree of arrests -- in this prevailing situation, we can't be sure that a fair and acceptable election will be held on November 23,” said Shujan President Hafiz Uddin.

He was responding to a query of a participant at the “National Election Olympiad” held at CIRDAP Auditorium in Dhaka.

Some 73 youths from 30 constituencies in the country, selected through regional Election Olympiads and renowned personalities, participated in the programme.

Regarding the early announcement of the election schedule, Shujan president said, “We don't understand the need to hold it [election] so early despite calls from opposition parties. Why can't you [Election Commission] move it to January next year? What is the problem?”

Shujan Secretary Badiul Alam Majumdar said, “The fourth-tier opposition party men are now being arrested. The first, second and third tiers are either in jail or in exile. In this context, election could be peaceful, but not fair.”

About the use of EVM, former chief election commissioner ATM Shamsul Huda said, “I have enough doubts about handling a sensitive issue [EVM] like this. If all parties don't agree on it, it shouldn't be done… if it is done forcibly there could be a problem.”

On August 30, the Election Commission drew up plans to use EVMs in several constituencies -- a move that was met with criticism from opposition parties.

Sources said the EC has proposed for Tk 3,821 crore to procure 1.5 lakh EVMs.

Speakers said peaceful elections, like those of the four city corporations, do not mean they are fair and acceptable.

“Election has to be fair, peaceful and democratic. But we don't want such peaceful election that we have seen in Rajshahi City Corporation -- a controlled one,” said Badiul Alam Majumdar.

He said that the Digital Security Act has been “given in hands of the security forces as a weapon”.

Speakers also expressed hope that the main opposition party BNP will not boycott election this time.

ATM Shamsul Huda said, “As BNP didn't join the last national election in 2014, it created a mockery of a situation… I think they would join the election this time. But they are, most likely, thinking of an expression of protest.”

At the end of the programme, ten winners of the olympiad were awarded prizes.

Around 2.30 crore youths are expected to exercise their voting rights in the upcoming election, according to EC.

Citing that no political parties had kept all of their promises after assuming power in the previous election, Shushashoner Jonno Nagorik (Shujan) today urged the party, regardless of whoever wins, to fulfill their manifesto this time.

“All political parties come up with optimistic pledges in their manifestos but they become valueless if the elected government is unable to implement them,” Shujan General Secretary Badiul Alam Majumder said.

He was addressing a press conference at Dhaka Reporters Unity (DRU) in Dhaka when he made the comments.

Badiul Alam hoped that the presence of voters will be higher in this election than previous one as it is a participatory election.

Speaking at the programme, former adviser to a caretaker government M Hafizuddin Khan expressed worry that the election will not be held in a free and fair manner as the activities of the Election Commission could not build the trust.

The election atmosphere is not positive till now but it might change as the army will be deployed from tomorrow across the country, he added.

WHEN ARMY WILL BE DEPLOYED?

Election Commission Secretary Helal Uddin Ahmed, on December 13, said armed forces would be deployed in the country from December 24 as a “striking force”. The armed forces will carry out their duties till January 2.

WHAT IS THE ELECTION SCHEDULE?

As per the revised polls schedule, the 11th parliamentary election will be held on December 30.

The Election Commission had fixed November 28 as the deadline for filing nomination papers, December 2 for scrutiny and December 9 last date of withdrawal.