At cost of people 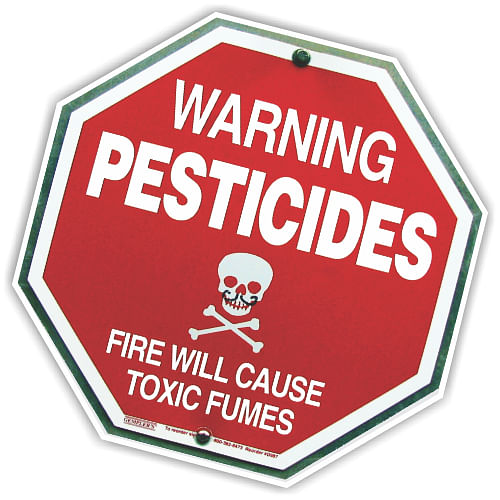 Abu Bakar Siddique, a vegetable grower at Shibganj of Bogra, became frustrated after his neighbour bagged higher profit from growing bitter gourd on a piece of land smaller than his.

He was certain that his neighbour's success lay in applying pesticides twice a week. But Siddique, 50, who also works as a mason sometimes, had time constraints and could spray pesticides only once a week.

He also had this faint idea that excessive use of pesticides is harmful for humans. But his neighbours and millions of farmers across the country are least bothered about it. Profit-driven, their goal is to keep pests at bay to ensure fresh and good-looking vegetables and fruits and thus secure better prices.

"Pests stay away from crops as long as there is the effect of pesticides. For this, it is necessary to use pesticides twice a week," Siddique told The Daily Star by phone.

This profit motive is further fuelled by dealers of big chemical companies. In the absence of adequate monitoring and supervision by agriculture officials, these dealers woo farmers into applying toxic elements, including banned pesticides, to crops, vegetables and fruits.

Their representatives visit farmers at their homes and farms to persuade them into buying chemicals that can cause serious harm to humans. These agents have their sales target set by the companies, agro officials said.

"We have to visit farmers regularly to achieve the target," said one representative, seeking anonymity.

The use of pesticides is so indiscriminate that farmers apply those 10-15 times on fruits and 8-10 times on vegetables, according to a study by Bangladesh Agricultural Research Council (BARC).

Helal Uddin, a banana farmer at Madhupur in Tangail, said, "Everybody wants to have fresh-looking and big bananas. If we do not use pesticides, there will be pest attacks and spots will develop from the attack. Nobody will buy them."

Syed Nurul Alam, chief scientific officer and head of entomology division of BARI, said farmers use pesticides indiscriminately without even identifying the pests. Sometimes they do not even know if the pesticides are working.

"Farmers do it basically on the advice of dealers, who have little knowledge about pesticides."

He blamed weak surveillance on pesticide sales and its uses.

Nurul said pests developed resistance due to the haphazard use of pesticides over the years. This is why farmers need to apply even more pesticides on their farms.

"Many farmers also believe that the toxicity lessens after cooking. But, in fact, toxicity of some fungicides rises under heat," he added.

Residues of most of these chemicals can be present in the food items for up to seven days after application, but the consumers have no way of knowing when pesticides were last applied, experts said.

After harvest, begins the preservation stage. At this stage, a section of farmers and traders uses chemicals such as calcium carbide for ripening fruits and formalin, aldrin and ethion to preserve fruits, vegetables and fish, according to the National Food Safety Laboratory and Bangladesh Food Research Institute.

Farmers and traders rely on harmful preservatives as there are no improved preservation technologies, packaging materials and proper transport system for perishable commodities. There is no proper check on the sales of these chemicals either, analysts said.

Md Miaruddin, a principal scientific officer of BARI, said ripening agents are used mainly by middlemen to ensure uniform ripening of various fruits and vegetables such as tomato.

The growing use of pesticides and preservatives is linked also to the expansion of commercial farming. While the commercial farming has facilitated increased production to meet the rising demand, government agencies are doing little to ensure safe food.

Akhteruzzaman, director of plant protection wing under the agriculture ministry, which is responsible for regulating sale and use of pesticides, dismissed that farmers apply excessive pesticides to crops.

"We have field officers at grassroots level and they are monitoring the use of pesticides."

Asked why residues of various banned pesticides like DDT are being found in food items, he said they were looking into it.

According to him, there has been no overuse of chemical pesticides because of high cost. "It is not overuse; the frequency of the use is high."

"So far, our focus has been on increasing food production on a small piece of land. Production has increased but the quality aspect of food remains out of focus," said Kabir.

M Asaduzzaman, a professorial fellow at Bangladesh Institute of Development Studies, said tax on chemicals should be increased to discourage their use.

"Safe preservation technologies should be introduced and made available to prevent adulteration. The packaging system also requires improvement for marketing," he said.