It is mainly the wholesalers who are to blame for food adulteration. If not at equal level, growers and producers are also indulging in such unlawful and criminal activities.

Not many retailers use chemicals like formalin and calcium carbide in food items, but they all know which items are chemical-free and which are not.

Experts and safe-food campaigners put it all down to the wholesalers' insatiable greed for profit.

They, however, acknowledge that inadequate storage and preservation facilities are another reason for many traders going crook.

Mango traders in Chapainawabganj and Rajshahi use toxic chemicals to ripen the fruit. They also do so to get the produce out on the market sooner and to increase its shelf life.

Mohammad Latif, a small trader at Kansat in Chapainawabganj, said around 80 percent wholesalers there and Rohanpur Bazar in the district use formalin in mangoes. 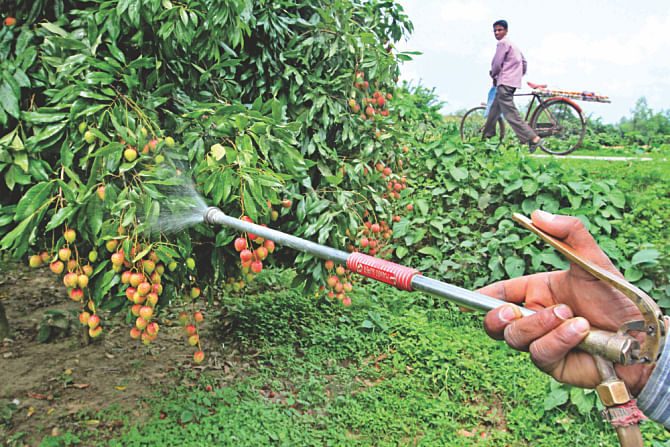 Traders and growers spray chemicals on litchis to increase their shelf life before they are shipped out to the market. If they do not taint the fruits with toxic chemicals, the fruits would stay good a few days less that's all. The photos were taken in Dinajpur. Photo: BSS/File

“They use formalin in off-season,” Latif said, adding that growers too use pesticides, fungicides and calcium carbide at different stages of production.

Kansat is one of the largest mango markets in the country; around 200 traders do business there. During recent drives against the use of formalin, many wholesalers at Rajshahi's Baneshwar, another large mango market, were also found using the toxic chemical.

Traders of litchis, another summer delight available for only a few weeks, take part in such practices.

In Dinajpur, the home of tasty litchis, a significant number of orchard owners spray the fruits with toxic chemicals just days before shipping them off to the market.

According to experts, growers should stop spraying chemicals at least two weeks before harvest.

In 2012, 14 children died in Dinajpur and Thakurgaon with almost identical symptoms. Experts investigating the deaths believed that pesticides used in litchis could have been the cause.

Azibor Rahman, a litchi trader in Dinajpur, claimed that traders outside the district use formalin in litchis at their wholesale stores.

He said some farmers had to use chemicals on litchis and delay harvest due to transport strikes in the north.

He said traders at Shyamoli and Kakrail in Dhaka and in Chittagong, Barisal, Gazipur and Tangail were the main buyers of litchis from Dinajpur.

Vegetables are not safe either.

Experts had detected formalin-tainted tomatoes in the capital's kitchen markets several years ago.

Many growers in Panchagarh use calcium carbide in tomatoes to make them look reddish and fresh.

Atahar Ali, a wholesaler in the district, said they use different types of chemicals to ripen tomatoes only in the winter, as tomatoes ripe naturally in the summer.

Wholesale traders also use formalin to preserve the perishable vegetables to avoid losses, as there is no cold storage in the district, he said, adding that there were eight to 10 wholesalers in Panchagarh.

Contamination has crept into poultry as well.

Scientists have found excessive amount of chromium in chicken meat, bone and liver. Over consumption of chromium could lead to cancer. 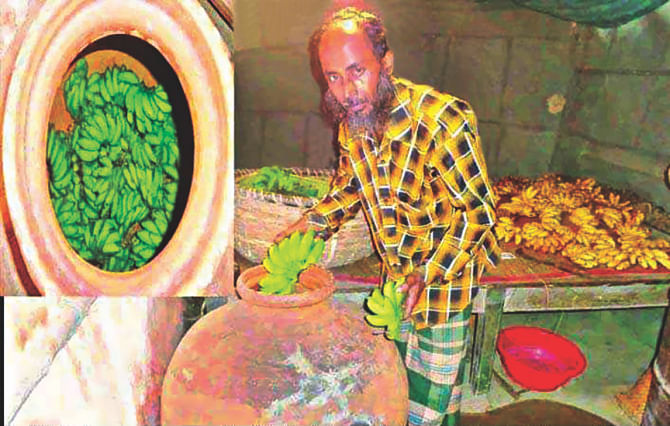 Chemically treated bananas are being heated up in an earthen pot in Bogra so that they ripe faster. Photo: Banglar Chokh/File

During a recent visit to the capital's Hazaribagh tannery industry area, it was found that a four-ring chain was involved in chromium-contaminated poultry feed business.

Over 80 unauthorised factories are involved in meat bone business, according to locals.

Requesting not to be named, he said he buys leather dust from tanneries.

Executive Magistrate Anwar Pasha, who has been engaged in efforts to combat food adulteration for several years, said wholesalers were found guilty of fruit adulteration while many vegetable growers were also found using harmful chemicals.

“Formalin-tainted apples were found in the capital's fruit shops during drives, while in some cases the shop-owners admitted their involvement in the adulteration,” he added.

Rashid-e-Mahbub, chairman of the National Committee on Health Rights Movement, a non-government platform, said that in fruit and vegetable businesses, wholesalers are mainly responsible for adulteration.

“Only a few cold storages are there to preserve perishable fruits. This may prompt wholesalers to find an illegal way like using formalin,” he said.

Our correspondents from Rajshahi, Dinajpur, Chapainawabganj and Panchagarh contributed to this report.