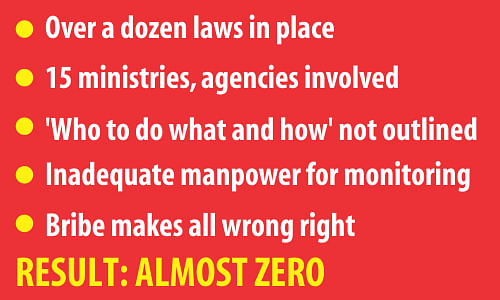 To ensure safe food for people, the legal provision could not have been any more stringent than what it is now. But non-enforcement of the laws is all to blame.

Whoever adulterates any food item or drink and sells them shall be sentenced to death or be imprisoned for life, the Special Powers Act of 1974 has provision for this harsh penalty for food related offences.

But the way unscrupulous traders and companies have flooded the market with noxious food items, it is obvious they care little about the death penalty.

The sheer indifference of successive governments in enforcing the law has given the offenders the freedom to make a market where profit takes priority over people's lives.

Like the Special Powers Act, 1974, more than a dozen legislations, made since the days of Pakistan, still exist to ensure food safety.

The laws made during the Pakistan period largely dealt with the issues of regulating production, transport and sale of essential commodities at fair prices along with food adulteration and contamination.

Later, governments responded with tougher legal provisions when the traders and companies continuously over the years adulterated and contaminated food items to make more profit.

The governments had also put emphasis on food safety in various national policies, including the one on health, food and nutrition.

This clearly shows the governments were always aware of the situation and had taken steps to protect people.

But people are still not being protected as the laws do not rule. Rather, the individuals and companies involved in food adulteration and contamination rule the market.

Advocate Sultana Kamal, a leading human right campaigner, said the situation only deteriorated because the criminals had not been punished. "Seeing that nothing happens even after a crime is committed, some people would do anything for profit. And exactly that's what is happening here,” she told The Daily Star recently.

Jurist Shahdeen Malik, however, said, " … probably our state is not keen on the rule of law.

"The state itself ignores and violates law. Such an attitude of the state towards the law has infiltrated or spread among different segment of the society, including food producers and sellers," he told The Daily Star yesterday.

Parliament, which has been enacting the laws, remains silent about the non-enforcement of the legislations. In so doing, parliaments in last more than four decades ignored their constitutional obligation to review the enforcement of laws and propose measures for such enforcement.

Similarly, parliament does little to hold the government accountable for its failure to properly enforce the laws regarding food safety.

Parliament, even though elected by the people, cannot act as a forum for ventilation of people's grievances, their difficulties and their anxieties.

Asked about the constitutional provision {article 76 (2) (b) of the constitution}, Suranjit Sengupta, chief of the parliamentary standing committee on the law ministry, said parliament has the responsibilities to review the enforcement of existing laws.

"It may ask the ministries concerned to enforce the laws properly if there is any lack of efforts," he said, adding, "This practice however has not been established."

Malik, however, blames the huge number of laws on any single issue. "Numerous and varied laws on any matter usually marginalise the impact of the laws. Parliament may want to review all food related laws," he added.

The non-enforcement of laws on food safety also shows how the state has been unable to uphold one of its fundamental principles dealing with people's basic needs.

Article 15 of the constitution states that it shall be a fundamental responsibility of the state to attain … a steady improvement in the material and cultural standard of living of the people with a view to securing to its citizens the provision of the basic necessities of life, including food, clothing, shelter, education and medical care.

In Malik's view, "Food is the first basic necessity. The existence of the state may be questioned if it does not take necessary steps to ensure safe food for its citizens."