Let's start from the root level

Shykh Seraj on judicious use of chemicals
Staff Correspondent 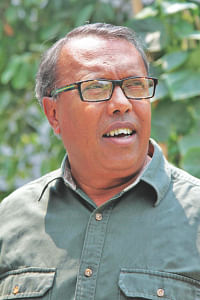 Noted agriculture development journalist Shykh Seraj has suggested taking integrated pest management (IPM) methods to every village in the country as an effective way of preventing food adulteration.
“If we want to ensure food safety, we have to focus on the root cause of the problem. Contamination of food starts at the production level. So we need to go for chemical-free production methods,” he told The Daily Star.
The government needs to allocate more money to promote IPM products and services among farmers as soon as possible, he said.
Shykh Seraj, best known for his popular series Mati O Manush on BTV and Hridoye Mati o Manush on Channel i, has travelled extensively across the country, talking to farmers about their difficulties in growing different crops and voicing their needs over the last three decades.
He said IPM has proved to be a very effective tool for checking contamination of crops in many districts, including Jessore, Narsingdi and Mymensingh. It, however, has not been adopted in other districts.
Farmers practising IPM become aware of the scientific cultivation method. They learn to select the best seeds available in the market, which significantly reduce risks of plant diseases. But those not following this method depend solely on chemical pesticides and do not pay any heed to maintaining the best farm practices, he said.
“There are two types of insects -- beneficial and harmful. The beneficial insects cling to the upper side of crops while the harmful ones to the lower side. Pesticides sprayed on crops basically kill the beneficial insects,” Seraj said.
Due to heavy use of pesticides over the decades, population of harmful insects has gone up and that of beneficial ones down. Worse still, the practice has helped develop pesticide resistance in harmful insects that are now showing immunity even to stronger pesticides.
Besides, the use of chemical pesticide is pushing up production cost, causing losses to farmers, he said.
“So there is no alternative to IPM,” Seraj said while lamenting that IPM items such as pheromone are not as available as the chemical pesticides.
“It is because chemical pesticide companies are very powerful and united. They don't encourage IPM. The administration also has not taken any vigorous action about it,” he said.
He called upon the government to pay special attention to the issue.
Seraj also suggested promotion of bee rearing with crops such as mustard, mango, litchi and coriander that produce more flowers than others.
“In that case, farmers will get extra money from honey and will not incline towards applying chemical pesticides,” he said.
Bees also help pollination that results in better yield in most cases, he noted.
Director of news at Channel i, Seraj is recipient of the Ashoka Fellowship, the Ekushey Padak and the UN Food and Agriculture Organisation's AH Boerma Award for his contribution to journalism on agriculture.