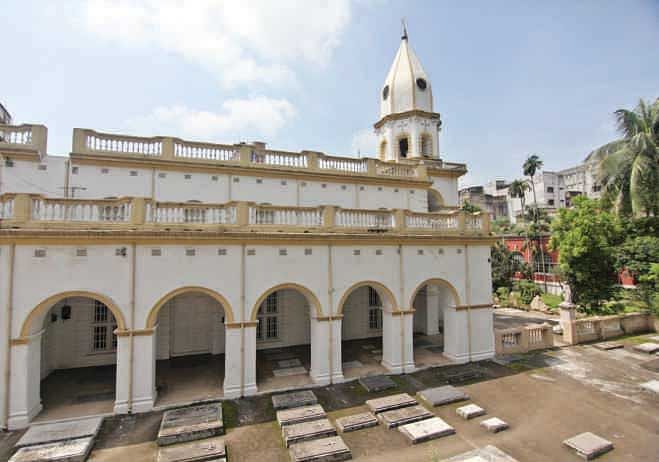 I studied and grew up in Armanitola of Old Dacca. The two landmarks in Armanitola are Mirza Golam Pir's Star Mosque and the Church of Holy Surrection at Armenian Street. The house of my school friend is nearby so the place is familiar to me. Beside the fortress like wooden gate is a marble plaque with the inscription Armenian Church 1781.
No churchgoers assemble there on Sunday. The church premises are quiet a place where the caretaker Shankar Gope, his wife Anima, son Sanjay an Economics student and a gate keeper Rajen Kumar, stay. There are a number of dogs of local breed guarding the premises. The church has a main prayer hall, a red brick colonial quarter where the only surviving expatriate Armenian Michael Joseph Martin (Mikel Hopcep Martirossian) stays when he occasionally comes from Canada. The Armenian Church has 200 tombs. It is believed that 250 baptisms and 50 marriages took place there.
There is a domestic quarter for Shankar and his family and a one room quarter near the gate for the gate keeper. But the premises are neatly kept with a garden, floral plants and big trees. Outside the church wall the street is littered with garbage! 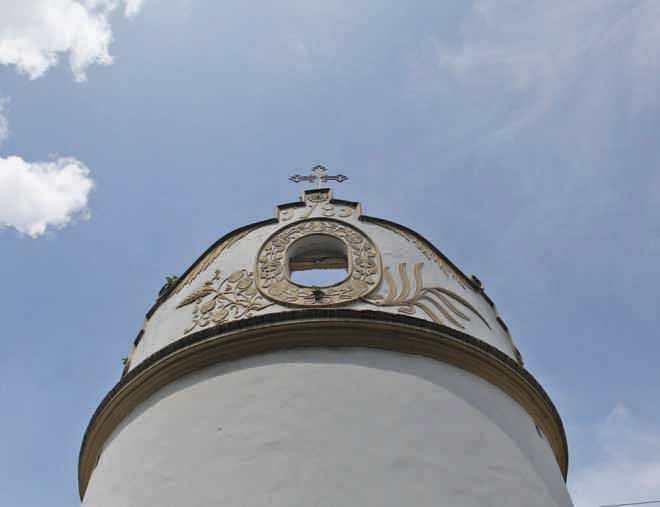 The Armenian Church built in 1781 was a wooden chapel. The church was consecrated by Bishop Eprahim who later became the Catholics of the Armenian Church in 1809. The little hill was named Armanitola. The steeple was built in 1837. A clock tower was erected which could be heard four miles away and it stopped in 1880.  The tower collapsed during the terrible earthquake of 1897. It was subsequently rebuilt. The church was built by Armenian traders (jute traders) Michel Cerkess, Okotavata Setoor Sevorg, Aga Amnius and Merkers Pogose. The land for the cemetery was donated zxby Agaminus Catachik.
The church is 750 feet in length. It has 4 doors, 27 windows. The main floor is divided into three parts: a pulpit enclosed by railings, a middle section with two folding doors, and an area separated by a wooden fence for seating women and children. There is spiral staircase into the church. A statue stands at the grave of Catachik Avatik Thomas. The grave is inscribed with the words "Best of Husband."
The last of the Armenians of Dacca--Martin, an 85- year-old gentleman (as told by Shankar) lives in Canada and occasionally comes to visit the church - such a prized real estate when the robber barons are busy! His wife Veronica Martin died on March 7, 2005 and is buried in the cemetery. She was 66. That possibly severed Martin's link with Dhaka. Their three daughters Eleanor, Christine and Cheryl are also settled in Canada.
'Avetis', an earliest Armenian merchant died at Tejgaon on August 15, 1714. The Armenian traders were scattered around in places like Dacca, Saidabad (Murshidabad), Hooghly, Patna, Chinsura, Kasimbazar and Calcutta. The integration of Bengal and Bihar in 1773 facilitated Armenian merchants trading in textile, saltpeter, sugar, opium and indigo. Many of the Armenian traders operated salt warehouses in Rangpur and Dinajpur
The Armenian traders who played a major role in the commercial life of Dhaka were the Pogoses, Agacy, Michael, Stephen, Joakim, Sarkies, Arathon (Aratoon), Coja (Khoja) and the Manuks (Manook). Margar David, Makeritch Abraham George, Michael Sarkies, Abraham Lucas, M. Highcazony, A.S. Makeritch, Tigran Naphiet, Thaddeus Naphiet, M.J.Catchhatoor, Joseph Lazarus were also prominent Armenians. 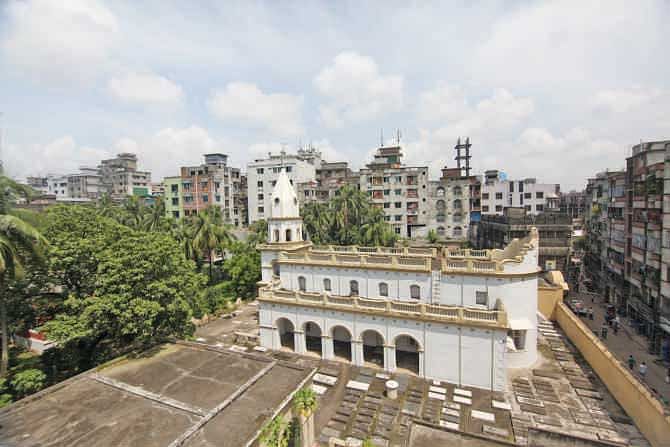 The earliest among the predecessors of Dacca's Nawab family was the merchant prince Khwaja Hafizullah. He liaised with the Armenian traders. There is still a road in his name in Begum Bazar. His nephew Khwaja Alimullah further advanced the fortune. A wealthy Armenian of Dacca JG Nicholas, 'Nicky' Pogose founded Pogose School situated at Chittaranjan Avenue near Sankhari Bazarin 1848.
Eminent poet Shamsur Rahman was a student of the school. A notable Zamindar of Dacca Ananda Chandra Roy also went to the school. Ananda Roy's palatial mansion is on the north-western corner of Armanitola Maidan. Later it housed Anandamoyee Girls High School. Singer Utpala Sen, whose house was nearby in Bandhab Kutir, went to the school. Pogose School later paved the way for Jagannath College.
It is heard that Aga Aratoon Michael owned large areas of real estate. Parts of gardens of Shahbagh, Ruplal House of Luxmi Bazar and Bangabhaban belonged to the Armenians. Aratoon owned a big house in Dacca worth Rs 4000. I have learnt there is a memorial house in honour of CJ Manook inside Bangabhaban. The Armenians also owned a zamindari in Barisal.
Heritage is a testimony to the past. The cultural commitment of a nation depends greatly on how well the heritage is maintained and cherished. The Armenian Church is a legacy that grew up in this land and speaks of people who strived here. Heritage declining in neglect needs attention and care.