Aid flows into Gaza after truce

Members of two Palestinian families walk next to a fire amid destroyed homes on their block in Shejaiya on Wednesday. Shejaiya was one of the hardest hit neighborhoods in fighting between Hamas militants and Israel during the 50 days of fighting. The fire was set by the home owners in an effort to keep mosquitoes away from their shattered homes which have no water or electricity. Photo: AFP

Millions in and around the war-torn coastal enclave were enjoying a second day of peace after the guns fell silent following a permanent ceasefire agreement, allowing people to begin putting their lives back together.

The truce, which went into force on Tuesday evening, saw the warring sides agree to a "permanent" halt to seven weeks of bloodshed in a move hailed by Washington, the United Nations and top world diplomats.

Under the deal, Israel agreed to immediately lift restrictions on fishing, allowing boats to work up to six nautical miles from the shore in a move which went into effect early on Wednesday. 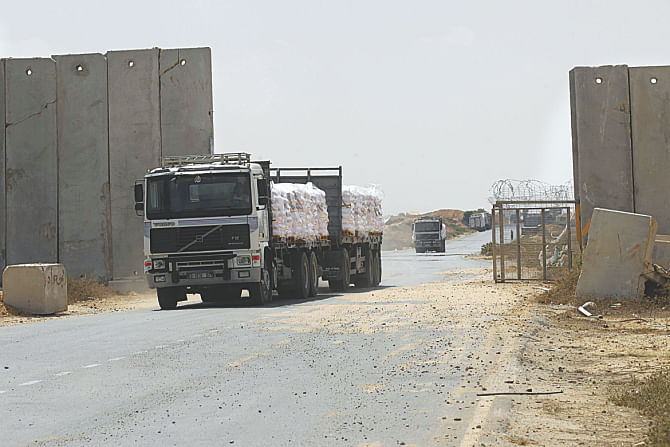 Trucks loaded with goods entering the Gaza Strip from Israel through the Kerem Shalom crossing in Rafah. Photo: AFP

It also pledged to ease restrictions at the two crossings into Gaza, Erez and Kerem Shalom, to allow the entry of goods, humanitarian aid and construction materials, in a move which began yesterday.

Debate on crunch issues such as Hamas's demand for a port and an airport, and the release of prisoners, as well as Israel's calls to demilitarise Gaza have been postponed for another month until the sides resume talks in Cairo.

For now, the focus is catering for the immediate needs of the 1.8 million residents of the Gaza Strip, nearly half a million of whom were forced to flee their homes because of the fighting.

At the Kerem Shalom commercial crossing, a steady trickle of lorries were arriving early in the day, most carrying commercial goods, although some were transporting aid, bearing the logo of the UN agency for Palestinian refugees (UNRWA).

On Wednesday, more than 200 tonnes of aid from Saudi Arabia, Oman and Turkey trundled into Gaza from Egypt, entering via the Rafah border crossing, an official at the frontier told AFP.

A World Food Programme (WFP) aid convoy arrived in Gaza for the first time since 2007, also crossing from Egypt, and carrying enough food to last 150,000 people for five days, the Geneva-based agency said.