4 burnt as buses torched in Dhaka 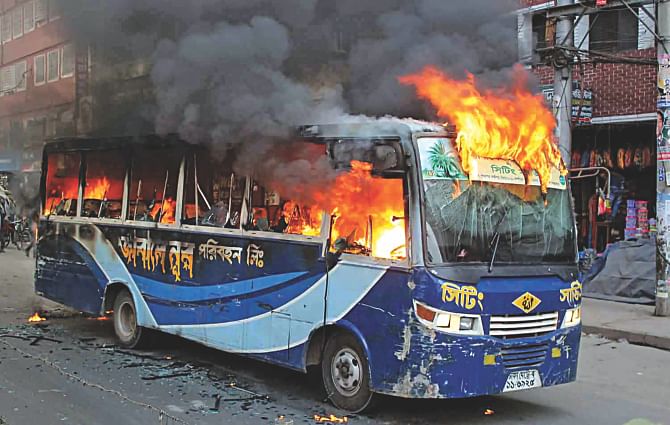 The file photo shows a bus has been torched on Rokeya Sarani at Sheorapara in Dhaka on Saturday, January 10, 2015

At least four people suffered burn injures as miscreants set fire to a passenger bus at Khilgaon in Dhaka this evening during the BNP-led 20-party alliance’s nonstop countrywide blockade.

A doctor at the burn unit told The Daily Star that the four suffered 6 to 15 percent burns.

Two other buses were set on fire by unidentified miscreants in Tantibazar and Gulistan areas of Dhaka today.

Miscreants set fire to an Abdullahpur-bound bus of Victor Paribahan at Tantibazar intersection at about 8:30am, an official of Fire Service and Civil Defense headquarters told The Daily Star.

Also, another passenger bus of Madina Enterprise was torched at Kaptan Bazar in Gulistan area around 2:30pm, Nilufar Yeasmin, an official of the fire service headquarters said.

On information, three firefighting units rushed to the spot and doused the blaze immediately, said Nilufar Yesmin an inspector of the Fire Service and Civil Defence.

However, there was no report of causalities in either of the incidents.

At least 35 people, including 23 without reported link to politics, have died in the political violence that came up from the start of this year, a year after the January 5 national polls.