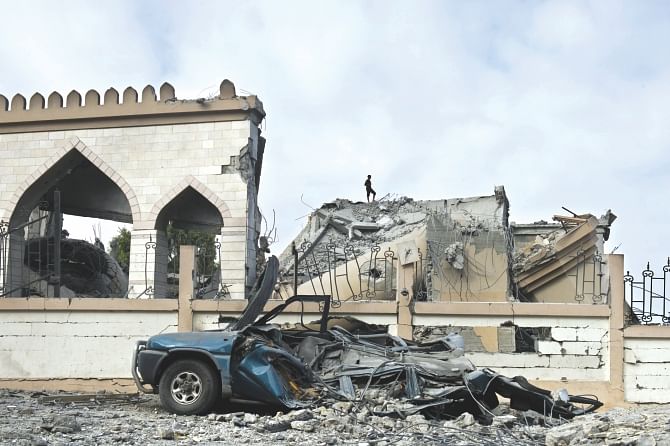 A Palestinian walks on the rubble of a mosque that was partially damaged by an Israeli airstrike yesterday in Beit Lahia in the northern Gaza Strip. Photo: AFP

The Palestinian leadership is to demand the international community set a deadline for Israel to end its occupation of the territories, a senior official told AFP yesterday.

The move comes as Palestinian and world leaders continue to push for a halt to seven weeks of bloodshed in Gaza, and seek a more permanent end to violence between Israel and the Islamist movement, Hamas.

The Palestinian leadership is preparing "to go to the UN Security Council to enforce an end to the (Israeli) occupation," senior Palestine Liberation Organisation official Wasel Abu Yusef told AFP.

Labour minister Ahmad al-Majdalani also said the leadership was "working towards... holding an international conference to set a timetable for an end to the occupation," he told AFP on Sunday. 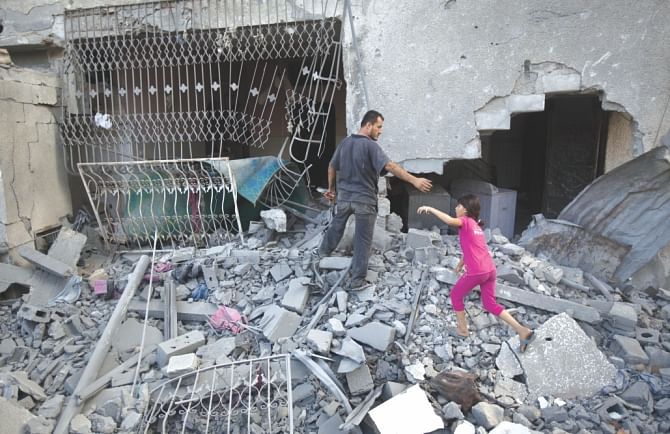 Palestinians walk through the rubble of a house. Photo: AFP

Neither official gave any details on when the Palestinian demand would be presented.

Such a move would likely be vetoed by the United States which traditionally opposes any step perceived as anti-Israeli at the Security Council.

But in the event of a likely US veto, the Palestinians would consider fast-tracking an application to become party to the International Criminal Court, Abu Yussef said.

"If the US uses a veto, then we still have the ICC card," he told AFP.

Since obtaining the UN status of a non-member observer state in November 2012, the Palestinians have repeatedly threatened to join the ICC where they could pursue Israeli officials over actions in the occupied territories.

Based in The Hague, the ICC can prosecute those guilty of genocide, war crimes and crimes against humanity, committed since July 1, 2002 when its founding treaty, the Rome Statute, came into force.

So far, the Rome Statute has been ratified by 121 countries, but not Israel, the United States, China or Russia. 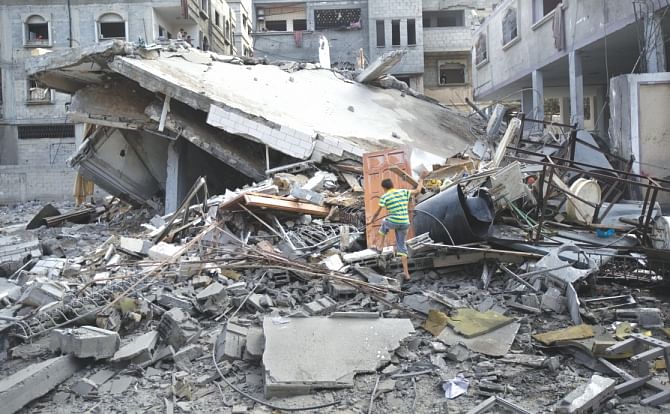 Only individuals, not states, can be prosecuted before the ICC.

Joining the ICC would also expose Palestinian factions including Hamas to possible prosecution.

Hamas, the main power in Gaza, said Saturday it had signed a document calling on Palestinian president Mahmud Abbas to apply for ICC membership.

So far, Abbas has not yet made the application.

Tehran, meanwhile, will "accelerate" arming Palestinians in retaliation for Israel deploying a spy drone over Iran, which was shot down, a military commander said yesterday.

Iran, which does not recognise the existence of Israel, has confirmed it supplied Palestinian fighters from Hamas and the Islamic Jihad with the technology for the rockets being fired relentlessly into Israel from Gaza since July 8.

"We will accelerate the arming of the West Bank and we reserve the right to give any response," said General Amir-Ali Hajizadeh, commander of aerial forces of Iran's elite Revolutionary Guards, in a statement on their official website sepahnews.com.

He also said Israel was acting like a "rabid dog" and "a wild wolf", causing a human catastrophe that must be resisted.

The death toll from seven weeks of violence in Gaza rose to 2,128 on the Palestinian side yesterday. Sixty-eight Israelis have been killed, four of them civilians and the rest soldiers.

Violence reverberated across Gaza yesterday with at least eight Palestinians killed in Israeli air strikes as Egypt proposed a new ceasefire that would open key crossings into the blockaded territory.

Since an earlier truce collapsed on August 19, the death toll in Gaza has risen steadily with 109 Palestinians killed in more than 350 Israeli air strikes across the territory.

Over the same period, more than 650 rockets have struck Israeli territory, one of which killed a four-year-old boy over the weekend, army figures show. Around 110 rockets were shot down.

Seventy-one rockets fired from Gaza yesterday struck the Israeli south, while another nine were shot down, the army said.

Prime Minister Benjamin Netanyahu said Sunday Israel would hit any place from which militants were firing, including homes.

His remarks came as the air force bombed a 12-storey residential block.

But by early Monday, there was increasing talk about a possible new ceasefire agreement which would see the delegations return to Cairo to resume discussions on an Egyptian proposal to broker a longer-term end to the violence.

"There is an idea for a temporary ceasefire that opens the crossings, allows aid and reconstruction material, and the disputed points will be discussed in a month," a senior Palestinian official told AFP in Cairo.

"We would be willing to accept this, but are waiting for the Israeli response to this proposal," he said, requesting anonymity because of the sensitivity of the negotiations.

Another Palestinian official said Egypt might invite Palestinian and Israeli negotiating teams to return to Cairo within 48 hours.

There was no immediate comment from Israel, with Netanyahu's spokesman Mark Regev saying Israel's position of no negotiations under fire had "not changed".

But Israeli Science Minister Yaakov Peri, an observer at the security cabinet and former head of the Shin Bet internal security agency, said if the rocket fire stopped, it was likely talks would resume.

"If a ceasefire goes into effect, and it sticks, there is a good chance that the prime minister will instruct the delegation to return to the talks in Cairo," he told public radio.

"Generally, we will agree to open the crossings," he said, referring to Erez and the Kerem Shalom commercial crossing for humanitarian aid, which Israel was "also willing to increase".

Regarding the Rafah crossing with Egypt, "that is a decision for the Egyptians," although Israel would support the deployment of Palestinian Authority security personnel at the terminal, he said, defining the broad outline of any arrangement.

But a more comprehensive deal -- involving Israel facilitating the reconstruction of Gaza in exchange for its demilitarisation -- was "far off", he said.