Ruins of a Lost Mosque

The ruins of an ancient mosque, `Harano Masjid' was found almost three decades ago in a village of Lalmonirhat district following excavation of the site where the construction of a new mosque is now progressing. The excavation is under tremendous difficulty due to lack of proper support and fund.
S Dilip Roy 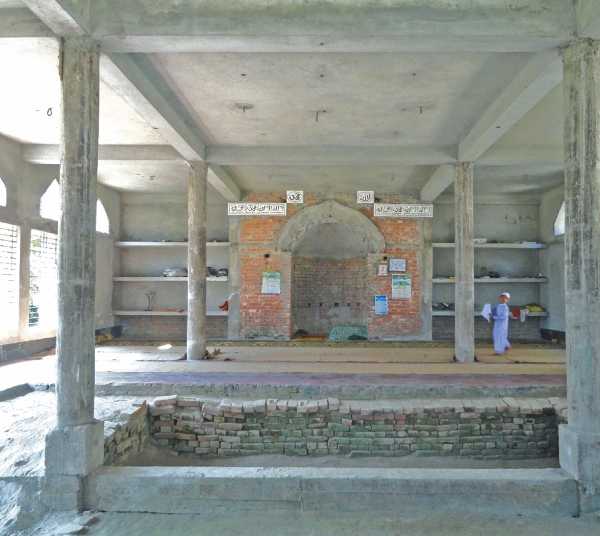 The 'Harano Masjid', discovered 27 years ago in village Ramdas under Panchagram union Parishad of Lalmonirhat Sadar upazila still under the ground. It is situated about 15 kilometers south-east of Lalmonirhat town and only two kilometers away from the Rangpur-Kurigram road from Barobari point. The mosque is 21 feet wide and 10 feet long. There are four pillars. Two of them are damaged.

Often, visitors from different places visit the mosque believing that it was made by the followers of the great Prophet. Considering the belief, local people call it Sahaba Keram Mosque. Many historians and researchers claim that it is probably the first mosque built in the sub-continent in the year 69 Hijri of Arabic calendar. The researchers found that the `Harano Masjid' was built after 61 years of building the Koanta mosque in the Chinese port city of Canton on the bank of the river Koanta in the Hijri year of 8. 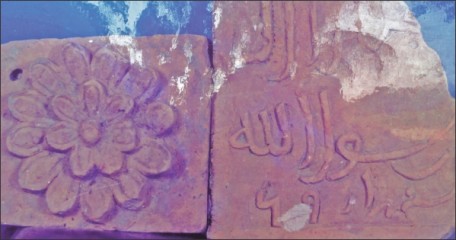 Locals said that the ruins of the mosque were first found in 1986 during clearing of the jungle areas there to make the land arable. The area was earlier known as' Mosder Ara', locally meaning that a deep forest containing a mosque of ancient times. It was not known to the local people till 1986 that there was a mosque. In fact, they could not comprehend what `Mosder Ara' really meant for though they knew the place as like as their forefathers. It is now clear that `Mosder' means mosque and `Ara' means a
jungle or deep forest. The place was a dense and fearful forest for centuries, full of wild animals like tigers, poisonous snakes, foxes and other animals. Nobody entered the jungle till 1986 out of fear.

But, the locals said that in the course of time the mosque sank into the earth beyond the knowledge of anyone, and a mound developed there under a big `Sheora' tree, perhaps following an earthquake. 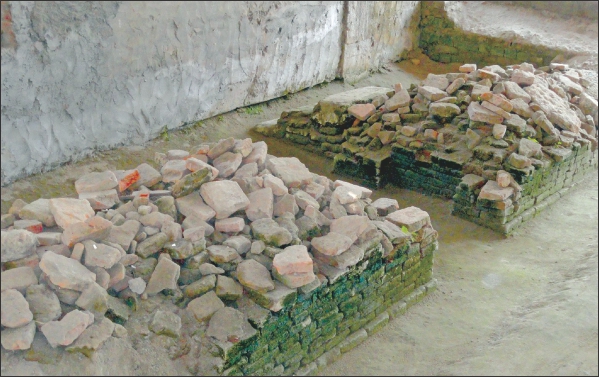 According to the Imam of the mosque Hafez Mohammad Abdul Hamid and some elderly people in the area, there was a very big `Paikor', tree on about an acre of land there in the jungle covering the whole area of the mosque long ago. Hundreds of families were evicted from their lands during the British period when construction of Lalmonirhat Airport at Lalmonirhat town started for the use of the British Air Force during the Second World War. The evicted families went to the nearby areas of village `Mosder Ara' for resettlement. In the course of time, the deep forest was gradually reduced in area with construction of houses.

Some people or their forefathers had bought two acres of land including the Ara of the then untraced mosque some decades ago. The very big tree was also sold and the two acres of land were divided into three equal parts among the owners of the land in 1985. The portion of the land containing the untraced underground ancient mosque went to the share of Omar Ali of the village who sold his part to Shamsul Haque. During the clearing of the jungle in 1986, the ruins of an ancient building were found while digging the land.

Ayub Ali, an elderly person in the village found six pieces of special size bricks with handworks on them. Other people and laborers also took away bricks, thousands in number after digging the area. The bricks found by Ayub Ali had some inscriptions on them. Kalema Taiyeba `La Elaha Ellallahu Muhammadur Rasullullah', 69 Hijri year were inscribed in Arabic on some of those bricks. Some other stones bore inscriptions of flowers.

Local people then informed the journalists and researchers of their findings in the beginning of 1987. Hundreds of people including Islamic researchers and historians started to flock the area became sure of an ancient mosque at the site which was built in the 69 Hijri year (690 AD).

The surrounding areas were partially dug then and local people found huge ruins of minarets and other structures which were built only for a mosque. There had been a number of miraculous incidents in the village concerning the power of the `Harano Masjid'. They also confirmed that the Harano Masjid at village Ramdas was built by those Sahaba-E-Kerams in the Hijri saying that the Almighty has blessed the people of the present time to know about the `Harano Masjid' which literally means “lost mosque”.

Referring the terracotta brick which was found from the mosque compound the founder and director of Lalmonirhat District Museum Ashrafuzaman mandol said that the mosque was built in 69 hijri. At present, the loose bricks are kept in Tazhat Museum in Rangpur by the Deputy Commissioner of Rangpur. Another mosque was built in 1364 AD by Arabian merchants who came to the region to promote Islam as well as for trading in the sub-continent through Brahmaputra and Teesta rivers.

Tem Steel, a British researcher and the Chief Adviser of the Tiger Tours Ltd. visited the mosque. He told the locals that during the lifetime of the Prophet two mosques were built in South Asia, one in China and another in India. But there is no archeological evidence at present in favour of the claim. But this mosque has evidence that it was built in 69 Arabic years. Possibly it is the mentioned mosque in South Asia. He also added that according to construction year it is an ancient mosque in the history of Islam. So as a Muslim country it should be protected and repaired by the government. ”I believe that this lost mosque is a part of Islamic heritage. The Arabs and Chinese who use to come to this area for trading used to take shelter in various places and worked for the promotion of Islam”. He urged to do more research on the mosque.

The principal of Harano Masjid Hafiziya Madrasha Mawlana Abdur Rahim said that an 11-member" 69 Hijri Harano Masjid complex committee was formed on April 12 in 1993 with Dr. Shah Muhammad Emdadul Haque as its president. After his death, Muhammad Nuruzzaman Bosunia is carrying out the responsibility as the new President. The committee has opened a visitor's book there on the same day on April 12 in 1993, which has already been signed by thousands of visitors both from home and abroad. 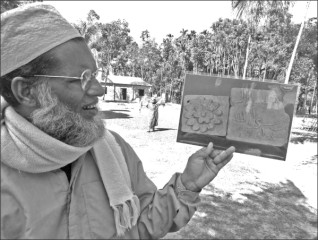 The president of mosque committee Muhammad Nuruzzaman Bosuniya said that the committee has planned to rebuild the `Harano Masjid,' to establish a Madrasha, one Islamic Library, a research centre, a Musafirkhana and an orphanage with 100 seat capacity on the mosque premises. “Reconstruction and renovation works of the mosque had started some four years ago. The ancient brick samples have been sent abroad for examinations,” he said adding that many people both from home and abroad wanted to donate funds and other assistances to assist the committee but no response yet.

He added that the ex-local MP, also was the Deputy Minister for Relief and Disaster Management Principal Asadul Habib Dulu along with State Minister for religious Affairs Mossarref Hossain Shahjahan MP, visited the mosque site on June 5 in 2003. They discussed with the committee members and they assured them of all possible cooperation to reconstruct the mosque and other complexes there on 62 decimals of land as soon as possible but it was only giving promises. “Now we need supports and funds to protect the heritage site. The people here in the village are poor and most of them live hand to mouth aren't capable to donate fund for continuing upgrading work for the mosque,” he said appealing supports and funds from the kindhearted people in home and abroad.