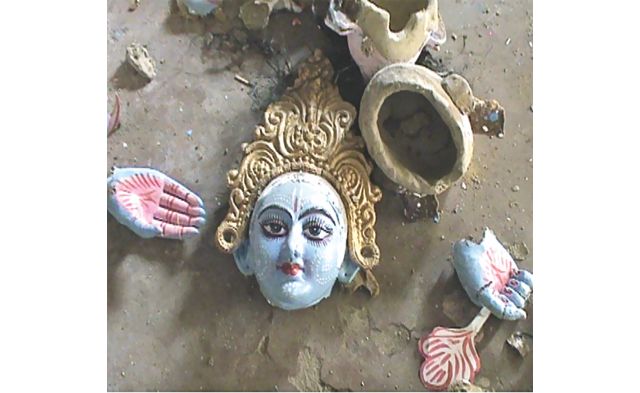 Jamaat-Shibir attacks on Hindu community and their temples continued in different parts of the country yesterday creating widespread fear among general people living unprotected in rural areas.
Reports of arson, vandalism and physical assaults on members of Hindu community and also on Awami League activists have been rampant since Thursday, when the International Crimes Tribunal-1 had awarded death penalty to Jamaat leader Delawar Hossain Sayedee.
Yesterday in Khulna, more than 300 Jamaat-Shibir and BNP acitivists brought out a procession from Chad Ali Bridge in Amadi Bazar area of Koyra upazila around 10:30am, during the BNP-called hartal.
Locals said the focus of the procession suddenly turned to Dhopapara, an extremely poor locality with predominantly Hindu population traditionally making a living on washing clothes. Within minutes, eight houses belonging to Hindus were set ablaze. While the Hindu men, women and children ran for safety, the attackers looted whatever they could put their hands on.
The attackers soon swooped on to nearby Amadi Bazar. They broke into eight to 10 shops belonging to local Hindus and looted them before being dispersed by Border Guard Bangladesh and police personnel around noon.
Meanwhile, the attack left a woman and a young man injured. They were admitted to the local health complex.
Amiya and Apurbo Das, who lost their home in the attack, said neighbours had tried to douse the fire but their thatched house stood no chance. Others who lost their houses to the arson include Subodh Das, Kartik Das and Sona Das. Each of the victim families had more than one thatched house. The attackers also torched a prayer room set up inside a house.
"We do not know what to do and are living in fear of further attacks," said Apurbo Das. Locals said the attackers also unleashed violent assaults on several residents.
Officer-in-Charge (OC) Khairul Kabir of Koyra Police Station said they had arrested two Shibir activists from the area. "Two to three houses were torched and looted and about eight shops were looted during the attack," said the OC.
Superintendent Golum Rouf Khan of Khulna police said BNP and Jamaat-Shibir men had set fire to thatched houses and a semi-concrete structure, and vandalised shops belonging to local Hindus.
The ploy in which attacks on Hindu temples and idols were executed, bear striking similarity in most cases throughout the country.
At Rotherpar village in Aditmari upazila of Lalmonirhat, religious fanatics entered the Sree Sree Shoshan Kali Mandir [temple] some time early hours yesterday and vandalised the temple smashing the idol of goddess Kali.
President of the temple committee Subhas Chandra Roy said they had lodged a written complaint with the police and it was now up to the law enforcers to take action.
At Lakhirpar village under Kotalipara upazila in Gopalganj, zealots set fire to a temple of goddess Kali on Monday around 7:45pm. The fire partially gutted the temple and destroyed four idols of the goddess. The arson instantly drew protests in the area.
Kotalipara police detained five suspects in this connection.
In Natore, Jamaat-Shibir men are strengthening themselves in the border areas of Lalpur upazila where Awami League activists and members of the Hindu community are living in fear.
On Monday evening, Jamaat-Shibir men in a bid to spread further panic set fire to a temple of Shoair village under Singra upazila and destroyed the Hori Protima [the idol of god Hori].
Isahaq Ali, secretary of Lalpur upazila unit Awami League, said Jamaat-Shibir men were capitalising on the innocence of the villagers through anti-minority propaganda.
“The situation is such that we cannot even go to the border areas of Char Jazira, Horir Char and Gorgoria where on the one hand, gangs of Jaamat-Shibir rule and on the other, outlaws roam around at large,” said Isahaq Ali.
In Chittagong, Hindu temple Sarbajaneen Magadeshwari Mandir at East Rupkania of Satkania upazila was torched early yesterday. Sukumar Nath, a local resident, said the arson took place around 2:30am.
"We woke up by the sound bamboos cracking in fire and witnessed our holy temple burn to ashes," said Nath, adding, "We do not know who did it."
Sub-Inspector Nazmul Alam of Satkania Police Station said the pattern of all the arson attacks leads police to suspect that Jamaat-Shibir fanatics had been involved in the act. Since Thursday, Jamaat-Shibir men had wrecked havoc in the area, mainly targeting the Hindu community.
The fanatics have changed their tactics for attacks on the state mechanisms. In Jhenidah, Lalmonirhat, Satkhira and elsewhere they shielded their attack force by luring rural women and children in the front line of the processions with religious propaganda.
In Uzirpur upazila of Barisal district, miscreants tried to set fire to Guthia Sarbajaneen Kali Mandir [temple] under Guthia union early yesterday.
President of the temple committee Sudhir Malakar said some miscreants had thrown burning torches of straw and tree branches inside the temple and fled the scene.
The fire died automatically as the branches and straw were not so dry but yet it partially damaged the fences said Sudhir, adding that they had informed the local upazila parishad chairman of the incident.
Officer-in-Charge Anwar Hossain of Uzirpur Police Station said a general diary had been lodged with them and that they had visited the spot and started investigating the arson attempt.