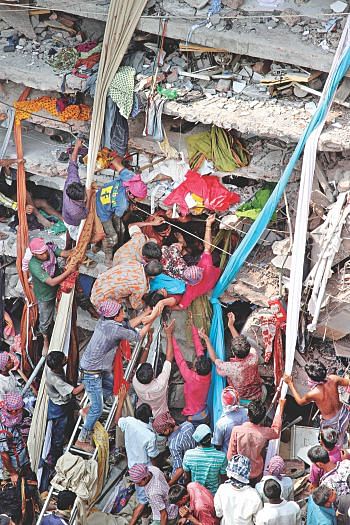 Firemen with the help of a large number of local volunteers rescue garment workers from the sandwiched floors of Rana Plaza at Savar Bazar bus stand after it collapsed yesterday morning. Photo: Palash Khan

Mahmudul Hasan suddenly felt a jolt. Within a moment, he noticed his colleagues running back and forth, screaming. It took Mahmudul a moment or two to realise that something ominous was going to happen.
As soon as he along with others moved 20 feet towards the staircases, the building began collapsing, giving him the feeling of a lift going down at speed.
"Darkness engulfed the entire place with thick clouds of dust. I heard screams around me. My heart started pounding," said Mahmudur, a quality inspector of Ethar Tex Ltd, which was on the fifth floor.
"I lay down near a pillar, thinking that perhaps I was going to die. We were being crushed inside," he said. The roof caved, leaving a space of three feet above him.
After sometime, a ray of hope emerged when he saw a faint light. It was a mobile phone light of one of his colleagues. He found a few more colleagues and together they pondered how they could find a way out of the horror.
"A lot of things and memories came across my mind. I was thinking about my wife and children," Mahmudul said at the emergency unit of Enam Medical College and Hospital.
Many of his colleagues tried to make phone calls but to no avail, due to poor network coverage. Some lucky ones, however, called their loved ones seeking help.
After an anguished wait of around five hours, rescuers finally pulled them out. "It was like getting a second life," Mahmudul said, his eyes brimming with tears.
Although there was no exact number of people who got trapped inside the collapsed building, most of the trapped ones had a feeling of near death. A large number of people were still stuck inside the building till the filing of this report.
Shipu Begum, a sewing operator of Phantom Apparels Ltd who got trapped on the fourth floor, said: "I saw the hole of an adjust fan around 20 feet away. With every bit of energy in me, I crawled to the hole."
Some rescuers saw her after she started screaming for help, she said, adding that a few more workers came out through the same hole.
The situation of Kamruzzaman, DGM of Ether Garments, was somewhat different. He was trapped for five hours on the sixth floor. There were around 12 people with him. There was a caved-in ceiling two to three feet above them. Around them were a few bodies on which pillars had crashed.
"We were restless and afraid in the beginning, but then we realised we were lucky to be alive,” he said.
In the darkness, they distributed the bottle of water one of them had. "Kneeling the whole time, we offered Johr and Nafl prayers in the hope of being rescued," he said.
Later they crawled towards the staircase, which was approximately 25 feet away from them.
"We could see a ray of light coming through a crack. We shouted through the crack, and after a while, rescuers came and pulled us out one after another around 2:00pm," he said, as he received treatment at Enam Medical College and Hospital.
The workers rescued said many of their colleagues trapped in debris were still alive and they could not move, as walls and machines had fallen on them.
Khairul Hossain, member of one of the rescue teams that drilled holes on the 7th floor, said: "Noticing me, a woman cried out and pleaded me to rescue her even if her legs needed to be cut off.  But I was helpless, as it was very difficult to get to her."
The members of the rescue teams said due to lack of oxygen and water, it would be hard for the trapped survivors to be alive for a long time.