Human chain in front of jail for release of bloggers 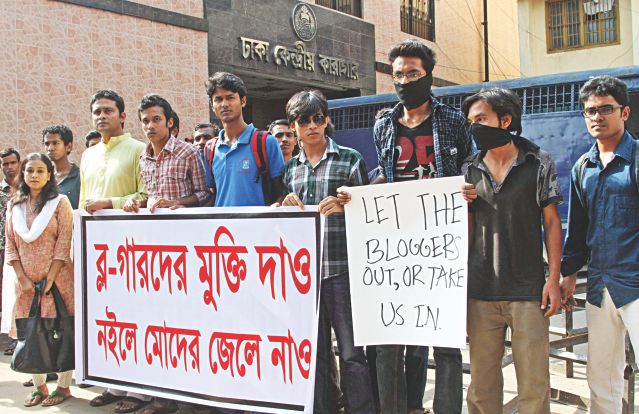 Teachers and students from different educational institutions and online activists yesterday formed a human chain in front of Dhaka Central Jail, demanding release of four bloggers.
They gathered there around 3:15pm, wearing black badges and masks and holding placards, some of which read, “Either release the arrested bloggers from jail or put us into it.”
After about half an hour, they moved to TSC of Dhaka University where they held a rally in front of the Raju Bhaskarja.
Speakers at the rally termed the arrests of the bloggers an infringement on the freedom of speech and an insult to democracy.
Bloggers Subrata Adhikari Shuvo, Russel Parvez and Mashiur Rahman Biplob were arrested in the capital on April 2 for their online posts deemed insulting to Islam. The fourth blogger, Asif Mohiuddin, was arrested the next day on the same charges.
The arrests drew huge criticism from people across the board as those followed a campaign by Islamist groups that said “atheist bloggers” were involved in the Shahbagh movement to demand the death penalty to war criminals.