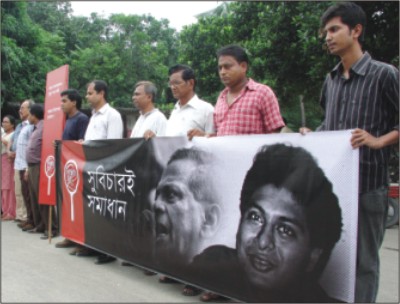 Ganatantri Party forms a human chain at Muktangan in the city yesterday demanding reinvestigation into the death of Md Nurul Islam.Photo: STAR

The leaders of Bangladesh Trade Union Centre (BTUC) deman-ded impartial reinvestigation into the death of Md Nurul Islam, former president of Ganatantri Party and BTUC, and exemplary punishment to the culprits.
They placed the demand from a human chain formed at Muktangan in the city yesterday, says a press release.
They alleged that a vested quarter continued pressure on Nurul Islam as he got the grand alliance ticket for contesting in the last parliamentary election from Noakhali-1. The conspiracy ended through his death by a mysterious fire.
The investigation committee formed by the government was partial and not acceptable. We demand an impartial reinvestigation into the death and punishment to the culprits, they said.