The story of tea workers 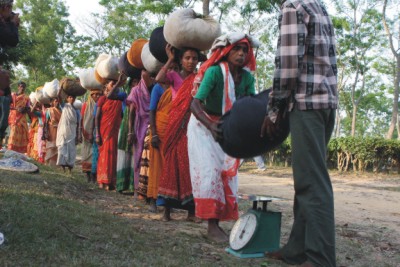 TEA, the second most popular beverage in the world, is believed to have first been popularised in China. For thousands of years the Chinese farmers had the monopoly of cultivating tea. Its cultivation in tropical and subtropical areas is a recent phenomenon.
Tea plantation in India's Assam dates back to 1839. The first experimental tea garden in our parts was established in Chittagong in 1840 and the first commercial-scale tea garden was established in 1854. Since then, the tea industry has been through quite a few historical upheavals -- notable among them are the Partition of India in 1947 and the Independence War in 1971.
Bangladesh has 163 tea gardens (including seven in Panchagarh where tea cultivation started only recently) with 36 of them being considered "sick." One unique feature of the tea industry is that all the land (115,000 ha excluding Panchagarh) granted for tea production is government land. Our tea gardens are huge and the management administer them like the British Shahib and the zamindars used to.
In the production, consumption and trading of tea, those who remain least attended are the tea plantation workers. The tea industry is very different from other industries. The production of tea involves agriculture and industry. What is unique about labour distribution in these two areas is that most of the labour force is engaged in agriculture -- in the tea gardens or the fields.
More than a century has passed since tea plantation workers settled in the labour lines, to which their lives and livelihoods have been tied ever since. They have no choice and entitlement to property. In addition to the wages, which are miserably low, they get some fringe benefits.
The houses in the labour lines are given by the employers. One worker gets one house, which is supposed to be maintained by the employer. However, generally, the workers themselves do the repairing and maintenance. Living conditions in these houses are unsatisfactory. Typically a single room is crowded with a whole family. Cattle and human beings are often seen living together in the same house or room. Some families try to construct an extra house or room for which they have to take permission from the management.
The maximum daily cash pay for the daily rated worker in 2008 was Tk.32.50. This is a miserable amount. Although the workers get rations at a concession, a family can hardly have decent food. They indeed have very poor quality and protein-deficient meals. Their physical appearance tells of their malnourishment.
Fringe benefits other than houses include some allowances, attendance incentive, rations, access to khet land for production of crop (those accessing such land have their rations slashed), medical care, provident fund, pension, etc. The Bangladesh Tea Association (BTA) calculates the cumulative total daily wage of a worker at Tk.73. The newly elected leaders in Bangladesh Cha Sramik Union (BCSU) have a different calculation, which is lower than that of BTA.
The wages of Bangladeshi tea workers are much lower than those of Indian tea workers. In Darjeeling, Terai and Doars of West Bengal the daily wage was Rs.53.90 in 2008, which, increased in three steps, will reportedly become Rs.67 in 2011. Strong labour movements have been instrumental in such wage increase.
In West Bengal about 400,000 workers will get this increased wages. Indian workers also get a better deal in accessing fringe benefits such as rations, medical care, housing, education, provident fund benefits, bonus, and gratuity.
The work condition of the tea workers, who spend most of the time under the scorching sun or getting soaked in the rain, is a concern. A woman tealeaf picker spends almost all her working hours, for 30 to 35 years, standing. The working hours are usually from 8 am to 5 pm (excluding a break for lunch) from Monday to Saturday. Sunday is the weekly holiday.
The tea workers are one of the most vulnerable people of Bangladesh. They deserve special attention of the state, not just equal treatment. But, unfortunately, they continue to remain socially excluded, low-paid, overwhelmingly illiterate, deprived and disconnected. They have also lost their original languages, culture, history, education, knowledge and unity. In the labour lines of a tea estate, they seem to be living in islands -- isolated from the majority Bangali community who sometimes treat them as untouchables.
How much longer will they stay confined to the labour lines? Will they continue to live as people without choice and entitlement to a land they have tilled for four generations? The employers probably want the status quo maintained for a steady supply of cheap labour. But the tea communities, a little more conscious now, want justice done to them. They want services from the state and NGOs in education, nutrition and health, food security, water and sanitation, etc. They also want to see their languages, culture, and social identity protected.
The government is going to build Digital Bangladesh and change the lives of the poor, the marginalised and the adivasis. The tea plantation workers are not just poor; they are a particularly deprived marginal community in captivity. They have limited scope to integrate with the people of the majority community and they face great difficulties in exploring livelihood options outside the tea gardens. The tea plantation workers want the state to address their case with care and translate its commitment to them by providing political and human protection.

Philip Gain is Director, Society for Environment and Social Development.

Anyone interested in the issues concerning the tea plantation workers will get a mine of information, insights and images in "The Story of Tea Workers in Bangladesh" a 300-page book, "Cha Sramiker Katha" (a 45-minute documentary film on the tea plantation workers in Bangladesh) and a photograph exhibition on tea workers -- all being launched at 10:00 am on May 10 at Drik Gallery (House 58, Road 15/A (New) Dhanmondi, Dhaka-1209). The photography exhibitions on the tea workers, forests and forest people will remain open from 3:00 PM to 8:00 PM (everyday) from May 10 to 19. Documentary films on environmental issues will also be screened during the exhibitions -- 6:00 PM to 8:00 PM (everyday).