BDR mutiny over as tanks roll in 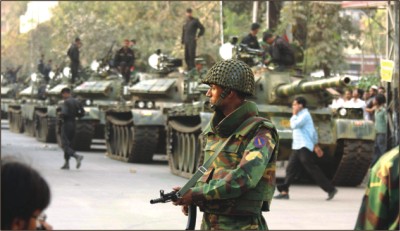 An armed soldier in position in front of a formation of army tanks on Satmasjid Road near Jigatola yesterday afternoon.Photo: Syed Zakir Hossain

The 33-hour mutiny by disgruntled border guards ended yesterday in their surrender at the Bangladesh Rifles (BDR) headquarters after Prime Minister Sheikh Hasina warned of tough action to take them off a "suicidal route".
In the build-up to the surrender, tensions simmered as army commandos rolled into the residential neighbourhood of Dhanmondi with tanks and armoured personnel carriers (APCs) in a show of force.
At least 21 people--nine senior army officers of BDR, seven BDR soldiers, four civilians and one BDR personnel of unknown rank--were retrieved dead in the two-day rebellion, according to the latest count by The Daily Star.
The bodies of eight army officers were found in a sewage-filled canal off the Pilkhana BDR headquarters.
Army personnel, Rab officers and police combined forces in an overnight search for the renegade soldiers who had fled the site of mutiny yesterday, before the dusk set in.
The bodies of six BDR jawans were found at Pilkhana and sent off to Mitford Hospital, hours past midnight.
Uncertainty lingered over the fate of more than 100 army officers still missing after paramilitary guards took them hostage in a dispute over "low pay, repression and corruption in the top brass".
In an effort to coordinate and monitor the country's law and order, now seemingly under strains, a special cell has been set up at the home ministry. The ministry's joint secretary (political) will coordinate the activities of the cell, the government said in a statement.
Army sources said the number of missing army officers could exceed 100. Other sources fear the mutineers killed and dumped up to 40 army officers in a place inside Pilkhana and covered it with bricks. None of the information could be independently verified.
Through intense negotiations since Wednesday, led by Home Minister Sahara Khatun, the government rescued 29 army officers: two colonels, five lieutenant colonels, 21 majors and one captain.
The ordeal for more than 100 family members of BDR officers and jawans -- trapped inside or held hostage -- came to a close yesterday. They came out with tears in their eyes.
With the surrender of the mutineers, police and the Armed Police Battalion took control of the BDR headquarters and its armoury in an evening push. The army with around 20 tanks and APCs took position on Satmasjid Road near the Abahani playground.
Dhaka Metropolitan Police Commissioner Naim Ahmed entered the BDR headquarters compound around 7:00pm.
In a televised speech around 2:00pm, Prime Minister Sheikh Hasina urged the mutineers to immediately lay down their arms and return to barracks, so that she is not compelled to use force to break the standoff.
Following her speech, a convoy of APCs and tanks from the Army's Nine Division in Savar and the 46 Brigade in Dhaka Cantonment drove into Dhanmondi area.
Thousands of curious people, sometimes cheerful, gathered in the area where the army had been deployed on a war footing.
The arrival of the army had apparently intimidated the mutineers into hoisting a white flag on the main gate of the BDR headquarters. Many fled the site through its Azimpur and Hazaribagh gates.
The Rab-10 members arrested 42 mutineers on their escape route through the Hazaribagh gate.
Commanding Officer (CO) of Rab-10 SM Kamal Hossain told The Daily Star: "They were trying to escape in lungis and other civilian clothes."
In another development, DMP Commissioner Naim Ahmed said the police took 100 BDR mutineers into custody.
Tensions ran deep across the country as reports of "rebellious behaviour" by BDR jawans started pouring in from Dinajpur, Chapainawabganj, Naogaon, Rajshahi, Bogra, Lalmonirhat, Rangpur, Kushtia, Thakurgaon, Kanaighat of Sylhet, Khagrachhari, Bandarban, Jessore, Satkhira and other places.
In many places, BDR jawans left their stations. Many others fired shots in the air. No casualties were reported in those areas.
Edited By Arun Devnath