Press for relaxing admission rules for them
DU Correspondent 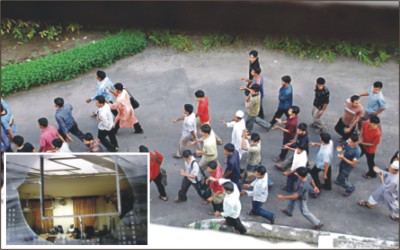 Madrasa students leaving the office of Dhaka University VC Prof SMA Faiz yesterday after vandalising it demanding relaxation of admission rules for them. A shattered windowpane, inset, of the ransacked office.Photo: STAR

A group of recent madrasa graduates vandalised the office of Dhaka University (DU) Vice-chancellor (VC) Prof SMA Faiz yesterday spreading panic on the campus.
The vandals were demanding cancellation of the university authorities' decision to not allow admission to students who did not study Bangla and English of 200 marks each in their higher secondary or equivalent courses.
About 200 madrasa students from different city madrasas along with some DU students embarked on the vandalism around 4:30pm, eyewitnesses said.
Six departments of DU this year decided not to allow admission to students who did not study Bangla and English of 200 marks each in their higher secondary or equivalent courses, and the DU committee of deans recently approved the decision.
The attackers vandalised doors, window panes, furniture and other office decorations.
“It was unimaginable what they did here today, such an incident never happened before in the history of the university. They should be arrested for the offence," Prof Faiz told reporters at a news briefing following the vandalism.
He said the attackers started ransacking his office in front of him, when he told them that the university authorities' decision is final and there is no chance of changing it now.
The attackers threatened him saying they will not let the university run normally, if they cannot get admission, the VC added.
Prof Faiz however assured the irate madrasa graduates that the university authorities will discuss the matter in future considering their grievances, but the current decision is final for this year.
The VC expressed his astonishment at the fact that the vandals left the office and the DU campus without any resistance after the vandalism.
"I immediately contacted the police and that was the very first time I ever called them to take action, as it was too much," Prof Faiz added.
When asked whether the attackers were DU students or outsiders, Prof Faiz said, "They came to me as students -- I couldn't specifically identify anybody."
But other DU sources said the attackers were from different madrasas of the city who were accompanied by some DU students who had also studied in madrasas before getting admitted to the university.
Some student leaders however alleged that the attackers were brought in, supported and escorted by Islami Chhatra Shibir, student wing of Islamist political party Jamaat-e-Islami.
Sources in the VC office said the attackers went to the office in the afternoon and submitted two memorandums to Prof Faiz under the banners of Bangladesh Madrasa Chhatra Andolon Parishad, and Madrasa Chhatra Odhikar Sangrakhan.
"Stern actions will be taken according to the university rules if the vandals are identified as university students," Prof Faiz said adding that they will seek legal action to the full extent against the perpetrators, if they turn out to be outsiders.
The university syndicate last night formed a four-member committee headed by Treasurer Prof Syed Abul Kalam to investigate the incident.
The committee was asked to submit its report in seven days' time.
Strongly condemning the attacks, the syndicate recommended that the two students who signed the memorandums be expelled if found to be DU students.
Replying to a question regarding whether the incident was the result of a conspiracy to close the university, Prof Faiz said, "I am surprised -- such a motive might have been behind it."
He said the DU authorities will not let that happen, adding, "We will resist such attempts all together."
He called on all related to the university to cooperate with the DU authorities, so no more unexpected incident occurs on the campus.
Prof Faiz confirmed that sales and submission of admission forms will continue today according to the authorities' decision.
He said the DU authorities have urged police to provide necessary security during sales of admission forms at banks on the campus.
DU officers' association, class IV employees' union, and DU teachers association (Duta) in separate news releases condemned the incident and demanded exemplary punishment for the perpetrators.
Duta executive committee is scheduled to meet this morning to discuss yesterday's vandalism.
Officer-in-charge at Shahbagh Police Station told The Daily Star that DU security officer Kamrul Hassan filed a case against 150-160 unidentified people last night.