Massive drive against honking of horns after Eid 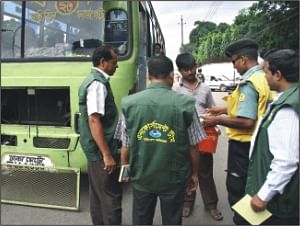 Law enforcing officials are checking papers of a bus during a drive against honking of horns on a city street last week.Photo: STAR

On a fine morning last week, uniformed law enforcing officers equipped with signs, leaflets and stickers with 'no unnecessary honking' slogans took over city streets.
They marched across several city avenues, showing the signs to the motorists, handing out the leaflets to drivers and pedestrians, and pasting the stickers on passing vehicles.
They also removed hydraulic horns from city buses, seized vehicles and filed cases against fifty-nine cars, taxicabs, buses, lorries and auto rickshaws for excessive honking during the stormy drive. Another hefty number of motorists was let off with harsh warnings.
The message of the four-day campaign from September 14 was loud and clear -- to remind motorists that there is a law against unnecessary noise and that the authorities are ready to enforce the law.
"The idea was to create awareness among general people -- to pass the message that noise pollution is harmful to the human senses," said Billal Hossain, a deputy director at the Department of Environment (DoE) and the top official regarding noise pollution. "We want to alert motorists before going all-out against the senseless honkers."
"While the idea was to create awareness, we also went into action against a number of offenders to demonstrate that we are ready to enforce the laws when necessary," he said.
Led by the DoE, officials from Bangladesh Road Transport Authority (BRTA) and Dhaka Metropolitan Police (DMP) also participated in the drive.
DoE officials said the operation would continue after Eid-ul-Fitre until its objectives are met -- to create awareness among general people about noise pollution.
A massive drive will be launched to go all-out against motorists violating Noise Pollution (control) Rules-2006, sources said, adding that the rules do not allow people to use horns which produce sound over 85 decibels on the city's thoroughfares.
The campaign comes at a time when noise pollution in city streets has reached unbearable levels.
Commuters in this capital city say it has become harder to be heard and to have a voice in the streets. They want a relief from deafening background noise of a city crammed with 14 million people, and thousands of mindless drivers who always have one hand on the horn.
“Whenever I talk to people, they always say-why are you shouting?” said Abdul Hamid, 56, a barber whose two-chair shop is on a corner near the Farmgate bus stop -- one of the busiest bus bays in the city.
Hamid himself, of course, was shouting.
“It may not be enough to make you crazy, but it is very tiring,” said Jamal Hossein, as he sat on worn plastic chair outside the food shop his family has owned for 10 years. He was shouting as he talked about the noise, though he did not seem to realise it.
Research reports from World Health Organisation (WHO), Unicef and World Bank (WB) say noise pollution is one of the 12 environment pollutants that causes 30 serious diseases. They can range from loss of hearing to problems with unborn babies.
Honking in heavy traffic can hit the hazardous zone of 80 or more decibels, but without prolonged exposure, the effect is largely psychological. ''It drives me absolutely up the wall,'' said Dr. Emdad Hossain, an otologist from Dhanmondi.
Among those who bear the brunt are traffic-enforcement agents, especially when they hold up traffic to clear an intersection after the light turns green. ''They (drivers) honk at any little thing that irritates them,'' said Imtiaz, a traffic sergeant from the west zone.
A study carried out by the Department of Environment (DoE) about two years ago showed that the decibel level in residential areas and commercial areas was hazardously more than permissible to human health.
The standard set by the DoE allows the noise level between 45 and 75 decibels depending on the zone. In residential areas, for example, the maximum level of noise allowed is 50 decibels during day and 45 at night. And in industrial areas, it could be as high as 75 decibels during daytime and 70 at nights.
However, noise level in the busiest city thoroughfares tend to be around the 85 decibels mark, a bit louder than a freight train 15 feet away, said a DoE report. At certain locations, the report said, the noise often reaches 90 decibels, which is only slightly quieter than standing next to a jackhammer.