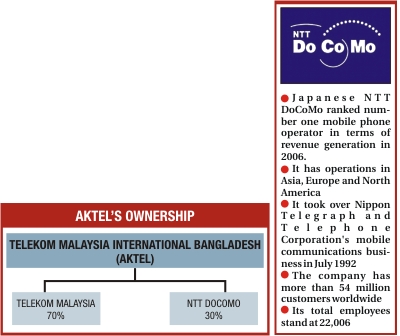 NTT DoCoMo, Japan's largest telecom operator, yesterday said it will buy AK Khan and Company's 30 percent stake in AKTEL, Bangladesh's third largest mobile operator, for $350 million.
“The deal, worth $350 million, is expected to be completed by the end of 2008,” according to the DoCoMo announcement posted on its website yesterday.
Telecom Malaysia (TM), the 70 percent shareholder of AKTEL, also announced the deal in the Malaysian stock exchange, saying, “AK Khan and Company is exiting TMIB and has settled on a share sale and purchase agreement to sell its entire stake in TMIB to DoCoMo".
Telecom Malaysia International (Bangladesh) Limited (TMIB), trading under the brand name AKTEL, operates mobile services in Bangladesh. At the end of May 2008, AKTEL had 7.71 million subscribers.
Talking to The Daily Star a high official of AKTEL said, “We need permission from the telecom regulators to handover the AK Khan and Company shares to DoCoMo. We will submit an application within a short time."
Terming DoCoMo's entry into the Bangladeshi market as good news, BTRC Chairman Manzurul Alam said, “The entry of such a big company in Bangladesh will certainly enhance the market's dynamism.”
With DoCoMo's purchase of the 30 percent stake in AKTEL, three telecom operators in the country are now wholly foreign owned-- Banglalink, Warid and AKTEL.
The announcement said the company would participate in AKTEL's management and "actively draw on its expertise to enhance the company's business in the fast-growing Bangladeshi mobile telecommunications market."
DoCoMo will account for the investment in AKTEL under the equity method, the announcement said. DoCoMo is the largest cellular operator in Japan with approximately 54 million subscribers. It also has investments in other cellular operators in Hong Kong, Korea, Philippines, Taiwan, Guam and Northern Mariana Islands and Malaysia.
Industry insiders said Telecom Malaysia's new partnership in AKTEL will definitely bring something new to the Bangladeshi market. The technologically advanced DoCoMo is expected to introduce new products in the highly competitive market, they added.
AKTEL recently lost its place as the country's second largest mobile operator after Grameenphone, being overtaken by Banglalink. It has struggled to compete at a time when its rivals have increased marketing spend and cut prices.
At one stage it seemed as if the UK's Vodafone would buy AK Khan and Company's stake in AKTEL, but Vodafone appeared to get cold feet, concerned about how it would handle the relationship with TM, insiders said.
Telekom Malaysia International President and Group Chief Executive Officer, Dato' Jamaludin Ibrahim in news statement yesterday said, “We are pleased that a highly-innovative company like DoCoMo has chosen to invest in TMIB and we look forward to the contribution that DoCoMo will bring to further strengthen and improve the services.”
“We would like to thank AK Khan and Co for their relentless contribution to TMIB throughout our partnership over the years. In the next phase of development, we aim to make TMIB more competitive. TMIB customers can look forward to more innovative products and services as well as better network coverage,” he added.