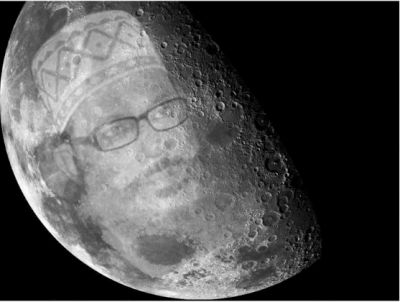 The photoshopped image of the moon with Sayedee's face, found on Jamaat-Shibir Facebook page Basherkella.

Absurd it may look, but a picture of convicted war criminal Delawar Hossain Sayedee superimposed on the face of moon posted in Jamaat-Shibir Facebook page â€œBasherkellaâ€ was actually sold to a large number of people as an omen.
And that omen, to these people, is a call to fight the government and free Sayedee, a top Jamaat leader, at any cost.
This "divine" Facebook picture, posted on Saturday evening by one â€œCarbon Tasnimâ€ of Faridpur, was circulated by Jamaat-Shibir activists through cell phones and computers.
The caption reads: From late Friday night to early Saturday, people from Bangladesh to Saudi Arabia saw Sayedee's face (in the moon). Such an image is God's sign that true devotees are honoured in different ways.
To draw attention of the people who do not use internet, announcements were made through loudspeakers of mosques about the picture, report our correspondents from Chittagong, Rajshahi and Bogra.
Besides, many people called The Daily Star staff members from different districts to verify if such a moon was really sighted.
In addition to using such bizarre and cheap photo manipulation for a heinous purpose, the Jamaat-Shibir men yesterday used women and children as human shields in Rajshahi and Bogra.
In the photograph, the black frame of Sayedee's spectacles and silk thread of his cap were mostly visible as the colour of those synthetic materials were more shining than his face.
The pro-Jamaat campaigners also pasted Sayedee's image on the national flag, propagating through social media that he could not be a Razakar.
The picture of Sayedee in the moon drew condemnation from Islami scholars and ridicule from regular Facebook users -- some among them are regular visitors of Basherkella page.
Several Islami scholars termed the use of this fake picture "a Jamaat-Shibir ploy" to cheat ordinary believers and exploited their religious sentiments.
According to scholars, such an act is a "great sin".
They note that such "sighting" of the moon can never happen in the light of the Quran and the Hadith.
â€œThe sun and the moon will be the part of hell after Qayamat [Judgment Day]. Those doing this [trick] are only trying to make Sayedee a sinner and part of the hell,â€ said Moulana Fariduddin Mash Ud, imam of Sholakia Eidgah in Kishoreganj.
â€œIt is funny that Jamaat-Shibir is doing this by putting Sayedee's face on a photo of the moon,â€ he added.
Moulana Ataullah, senior Nayeb-e-ameer of Bangladesh Khelafat Andolon, said it was not possible to see anyone's image in moon as per Islami shariah.
â€œThis just cannot happen. It is his [Sayedee's] disciples who have been doing this,â€ said Ataullah, also a son of famous Islami scholar Hafezzi Huzur. â€œMaybe if you think of someone for long, you can see his face in the shadow of a tree even.â€
The picture also prompted online bloggers and activists to make equally absurd jokes using Sayedee's pictures.
In one, for instance, Sayedee was shown as one of the three astronomers to have landed on the moon in 1969. In this picture, Neil Armstrong's face has been replaced by Sayedee's face.
Another showed Sayedee's face superimposed on the bottom of a baboon.