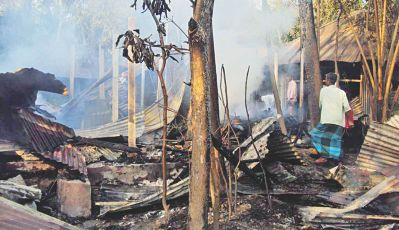 The charred remains of a house burnt by Jamaat-Shibir men in Noakhali yesterday. Photo: Banglar Chokh

Lashing a dÃ©jÃ  vu of 1971, Jamaat-Shibir fanatics yesterday wrecked havoc on the Hindu community across the country.
They damaged at least six temples, including one of Buddhists, and torched houses and business establishments of Hindu people in Noakhali, Gaibandha, Chittagong, Rangpur, Sylhet, Chapainawabganj and elsewhere in the country.
In Rajganj of Noakhali, Jamaat-Shibir men set ablaze a temple and eight houses of the Hindu community.
They also traded bullets with law enforcers in Datterhat under Sadar Police Station and in Rajganj under Begumganj Police Station, leaving two people killed. The deceased were identified as Khokon, 17, a pickup van assistant, and Liton (28), a fish monger, reports our Noakhali correspondent.
The Jamaat-Shibir men also looted a jewellery shop owned by one Biplob Sarkar at Chandraganj Purbo Bazar in Begumganj.
Witnesses and police said hours after top Jamaat leaders Delawar Hossain Sayedee had been sentenced to death, the marauding activists equipped with firearms, iron rods and kerosene set fire to Harishiva temple in Rajganj market area at 3:30pm.
"They returned an hour later. This time we were left with no choice but to flee the area, as they started torching our houses with kerosene," schoolteacher Shankar Chandra, who lost his house in the attack, told The Daily Star over the phone.
Some 50 Hindu people used to live in the houses burnt down, he said, adding that all but a few people had managed to escape to safety. Those left behind had been beaten up and kicked out of their houses by the Jamaat-Shibir attackers.
"We ran for our lives leaving everything behind. I was only seven during the Liberation War in 1971, but it didn't feel this insecure even then," said Shankar Chandra.
During the attack, the Jamaat-Shibir men also threatened newsmen to keep from covering the incident and took away cameras of photojournalists. They also forcefully picked up television crew Mohtasim Billah Sabuj. Locals later rescued Sabuj and took him to safety.
Assistant Police Superintendent (ASP) of Begumganj circle Mahbub Alam told The Daily Star that informed of the arson, police and firefighters had reached Rajganj around 5:00pm. Police had a hard time containing the violence in the area, as Jamaat-Shibir men had outnumbered the law enforcers.
When police tried to bring the situation under control, an exchange of gunshots between the attackers and law enforcers took place. Fish monger Liton died in the incident, said the ASP.
Almost at the same time, another group of Jamaat-Shibir men clashed and traded gunfire with police at Datterhat area leaving Khokon bullet-hit. He was declared dead when taken to Sadar hospital.
CHITTAGONG
Jamaat-Shibir men attacked two Hindu-majority localities at Jaldi union of Banshkhali upazila and set ablaze a Buddhist temple at Satkania upazila of the district yesterday.
They set fire to houses at Dhopapara and Mohajonpara of the union and attacked people with sticks, iron rods and sharp weapons, said Inspector Md Shahjahan of Banshkhali Police Station.
Two people had been critically wounded in the attack, said the inspector, adding that the injured had been undergoing treatment at upazila health complex.
Jamaat-Shibir men also set ablaze three shops belonging to Hindu people at Kaliaish union of Satkania upazila, said Additional Superintendent (South) Md Iltutmish of Chittagong Metropolitan Police.
GAIBANDHA
Rioters of Jamaat-e-Islami and student body Islamic Chhatra Shibir attacked a temple and business establishments belonging to Hindus at Bhelkobazar in Sundarganj upazila of the district yesterday afternoon.
Later in the evening, they swooped on and vandalised some houses in Shovaganj union.
Meanwhile, Hindu community leaders last night told The Daily Star that vandalism, arson and looting took place in temples, houses and business establishments of Hindu people in Sylhet, Rangpur, Thakurgaon, Laxmipur and Chapainawabganj.
According to them, attackers had vandalised the central Kali temple at Mithapukur upazila in Rangpur and another at Kansat in Chapainawabganj.
"We are observing the situation. So far we have heard they had attacked and vandalised temples, houses and business establishments of Hindu people at least in 10 districts," said Nirmal Chatterjee, secretary general of Dhaka Mahanagar Puja Committee.
"We have informed law enforcers of the situation and sought security to the Hindu community," he added.