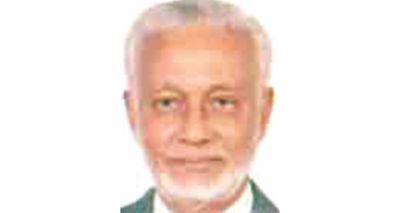 Muslehuddin Ahmad, former diplomat and founder VC of North South University, the country's first private university, died last night at Square Hospital in the capital.
Aged 80, he had been critically ill for the last two months after suffering a stroke and had been in coma since July 1.
His namaz-e-janaza will be held at Gulshan Azad Mosque after Johr prayers tomorrow.
Muslehuddin had built a distinguished career as a symbol of leadership in public policy and with innovations in higher education.
He joined the government service in 1956 through Central Superior Services. He contributed to the independence of Bangladesh as a freedom fighter in Paris during the 1971 Liberation War. Supporting the cause of his homeland, he defected from the then Pakistan embassy in France.
With his wife Shaista Ahmad, he set up a safe haven for Bangladeshis in his small family apartment, which later became the first Bangladesh embassy in Paris.
On his return to Dhaka, he took over Bangladesh Biman to lead the airline as its first and only chairman. He also served as a secretary and ambassador of Bangladesh government after independence.
Muslehuddin was perhaps best known as the creator of private university movement in Bangladesh and the founder of NSU.
He authored a book on the Palestine-Israeli conflict, "Promised Land", on which he delivered lectures and attended workshops in England, Malaysia and the USA.
As a political commentator, he often appeared on television and talked to the print media.