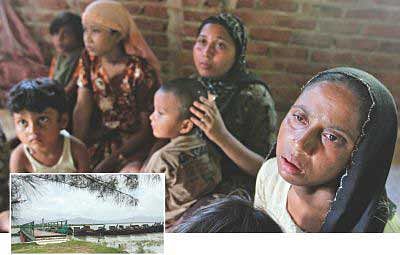 This Rohingya family, fleeing the sectarian violence in Myanmar, entered Shah Pori Island on a boat early yesterday after spending five days at sea. Inset, otherwise busy Teknaf Land Port remains idle yesterday as the trade between Bangladesh and Myanmar through it has been suspended since Saturday. Photo: Anurup Kanti Das

Dhaka has decided not to allow any refugee from Myanmar and directed the administration and law enforcement agencies to beef up vigilance and resist intrusion.
On the other hand, the United Nations High Commissioner for Refugees (UNHCR) in a briefing yesterday urged the Bangladesh government to allow the people seeking refuge in the country from sectarian clashes in the Rakhine state of Myanmar.
“We have had discussions with various government officials over the last few days on allowing refugees in the country,” UNHCR country representative Craig Sanders told The Daily Star.
But the foreign ministry categorically said it had not received any formal or informal request from the UNHCR regarding the issue.
“Our position is clear that we won't accept any more refugees in Bangladesh. There are already five lakh Rohingyas here and we can't allow anymore. Rather, we are in a process to send back the existing refugees,” said a senior official of the foreign ministry.
According to UNHCR estimate, there are more than 30,000 registered and two lakh illegal refugees in Bangladesh.
In a press statement, the ministry said Bangladesh and Myanmar were maintaining close consultations to ensure that developments in the Rakhine state did not have any trans-boundary spill-over.
It said the local administration and the law enforcement agencies in the border area have been asked to remain alert and increase vigilance.
“Bangladesh is confident that the government of Myanmar would be able to deal with the situation in the best possible manner and restore normalcy in the region in the shortest possible time,” said the foreign ministry statement.
The foreign ministry also expressed condolences over the loss of lives and property in the ongoing violence in Myanmar.
Asked, Foreign Minister Dipu Moni told reporters that it would be a serious problem for Bangladesh if there was any fresh influx of Rohingyas, as there were already a huge number of them in the country.
“Bangladesh is a densely populated country and the Rohingyas have impacts on our society, law and order, and environment. Considering all aspects, it will create serious problems for us,” said the foreign minister, adding, “We are not interested in more people coming to Bangladesh.”
She said the second highest-level official of UNHCR headquarters would visit Bangladesh soon to discuss the issue of existing Rohingya refugees.
The foreign secretary and DG concerned of the ministry yesterday [Tuesday] had talk with the head of Myanmar embassy in Dhaka and apprised the border situation, said Dipu Moni, adding that Bangladesh embassy in Myanmar was in close contact with the government here.
Meanwhile, the UNHCR in its yesterday's briefing expressed concern over media reports that Bangladeshi border guards were pushing back Myanmar nationals. “UNHCR is seeking clarification from the Bangladesh authorities on this and other similar reports,” it said.
“UNHCR is advocating with the Bangladeshi authorities to allow safe haven on its territory for those who need immediate safety and medical assistance. Previously, people have been allowed in Bangladesh for medical treatment. We hope that such good practices will be maintained,” it added.
Although security measures have been enhanced along the borders by both the countries, a few refugees had managed to enter the Bangladesh territory, said the UNHCR country representative.
As many as 250,000 Rohingyas from Myanmar entered Bangladesh in 1991 following persecution. Later, most of them returned, but those registered by the UNHCR now reside in two camps -- Kutupalong and Nayapara -- in Cox's Bazar.
In 2009, police investigations found link of Rohingyas with some militant groups in Bangladesh.
Over the years, many of the Rohingyas living here managed to obtain Bangladeshi passport with support from local authorities and went abroad.