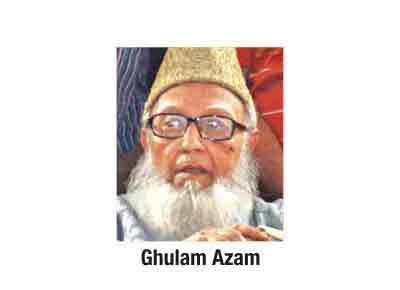 Rights activists and champions of the war crimes trial yesterday came down heavily on Al Jazeera television channel for broadcasting a report that said the ongoing trial would throw the country into further political instability.
They alleged the Qatar-owned news channel's story, aired yesterday, might help provoke instability in Bangladesh.
The report dealt with former Jamaat-e-Islami ameer Ghulam Azam standing trial for crimes against humanity during the Liberation War in 1971.
Talking to The Daily Star last night, human rights activist Sultana Kamal said it was rather the failure to bring the war criminals to book that underlay political turmoil in the past. The trial of Ghulam Azam is crucial to establishing stability and the rule of law, she noted.
The Al Jazeera report said if found guilty Azam would face the death penalty. “Whatever the decision the court comes to, it will have dramatic consequences. It may bring justice to many but at the cost of throwing Bangladesh into further political instability.”
Contacted for his reaction to the report, National Human Rights Commission(NHRC) Chairman Dr Mizanur Rahman said, “It's audacious and a kind of provocation. This type of conclusion can inspire the opponents of the trial.”
MA Hasan, a war crimes researcher, holds similar views.
“They [Al Jazeera] want to provoke instability in the country,” he observed, adding that the trial would rather bring peace, justice and sanity back to our society.
Sultana Kamal, former adviser to a caretaker government, asked how Al Jazeera had concluded that political instability would befall the country if Azam was tried.
“They [Al Jazeera] must let us know the basis of their assessment. As a television channel widely viewed across the globe, they must have assessed everything before drawing such a conclusion,” she said.
Kamal, also executive director of rights body Ain O Salish Kendra, said the trial must not be stopped on the pretext that it may lead to political instability.
Journalist Jahid Reza Noor, son of martyred journalist Sirajuddin Hossain, said fears of political instability were stoked also during the trial of the Bangabandhu Sheikh Mujibur Rahman murder case.
“But those fears did not come true then. And nothing will happen this time as well,” he added.
The Al Jazeera report said a recent hearing by the UN working group on arbitrary detentions concluded the detention of Ghulam Azam and others as “arbitrary and in breach of international law”.
Law Minister Shafique Ahmed, however, rejected the claim. He told the broadcaster, "Those who have been arrested are facing trial, so it's not an illegal detention."
Describing the Al Jazeera report as “ill-motivated”, the NHRC boss alleged the news outlet might have been trying to create confusion in the western world about the trial by raising doubts in the name of international law and standards.
“Why are they raising questions about the International Crimes Tribunal, which is a domestic court trying only those accused of crimes defined as international crimes?” he asked.
There is a provision for death penalty in the lower courts and people are being awarded the penalty, but nobody speaks about international standards in those cases, Dr Mizanur observed.
“A political game is on here and those who do not want the trial are playing that game,” he said.
Mizanur also opined that there was no universal definition of international standards with regard to the war crimes trial; it always evolves.
Ghulam Azam is not being tried as the leader of a political party or out of political vengeance, he continued. “He is being tried for crimes against humanity committed during the Liberation War in 1971.”
AL Jazeera reported that the 89-year-old Azam “cannot walk, cannot see, nor can he really hear. Yet he has 10 armed police officers watching him at all times”.
ABM Abdullah, professor of medicine at Bangabandhu Sheikh Mujib Medical University, who has been overseeing Azam's medical treatment in detention, said, “It's not true that he can't hear, walk or see.”
Azam can hear, walk and see but he has been suffering from some old age complications, the noted physician told The Daily Star.
Queried if Azam's age made him eligible for exoneration, the rights commission chairman said, “No legal system in the world considers the age of an accused as an exonerating factor in prosecution of crimes of humanity.”
Rather, he added, the accused in question had been enjoying a lavish life in a hospital prison cell at taxpayers' expense.
On the former Jamaat supremo's age and health, Jahid Reza Noor said, “Al Jazeera should look at the Nuremberg trials. The age was not a matter there and it should not be so here.”
He said, ”Azam is not your ordinary person; he is rather a symbol of all things sinister.”
Dismissing out of hand suggestions that the trial would cause political volatility, Jahid said, “Our nation is always on the side of everything that is good and against everything sinister.”