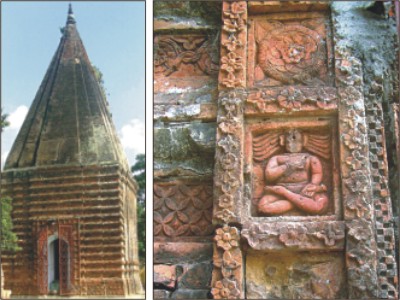 The Jagannath Temple at Chatmohor in Pabna and, right, the eroding terracotta and decorative plaques on one of the walls of it. The temple was built on the Korotoa over six hundred years ago. Photo: STAR

The over 600-year-old Jagannath Temple at Chatmohor upazila in Pabna is about to fall into ruin as it has not been repaired in 400 years.
Badrul Alam, a field officer of the department's Rajshahi division office, said the temple, locally known as "Handial Mandir", was declared a protected monument on April 12, 1934, according to an issue of Calcutta Gazette of West Bengal.
According to archaeological documents, the temple was built on the Karotoa between 1300AD and 1400AD, the officer claimed.
Bhawani Prasad, whose identity could not be known, in the year 1590AD renovated the 87.45 square metre temple, with a height of 11.21 metres from the basement. This information was found engraved on a wall of the temple.
Officials of the department presume that no repair work was made since. The department is going to do some repairs now even though it was declared a protected monument 74 years ago.
However, Jagannath Temple, one of the most beautiful Hindu temples in the northern part of the country, has been attracting tourists and visitors with its eye-catching beauty and terracotta.
High salinity of the ground the temple is built on is eroding much of the terracotta and ornamental bricks that are still in place. Hundreds of them have been misplaced or stolen over the years, a senior official of the department said.
The terracotta panels are placed between the decorated lines of bricks on the outside walls of the temple.
Officials of the archaeology department said the temple may attract more visitors if it is renovated.