Passengers suffer, commodities rot on trucks as ferries get stuck, freed throughout the day at Paturia-Daulatdia, Mawa-Kawrakandi
Star Report 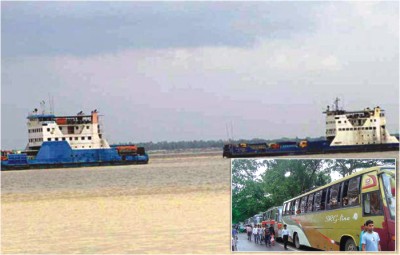 Ferries run aground between Daulatdia and Paturia in the middle of the Padma causing suspension of ferry service and creating a six kilometre long queue, inset, of vehicles from Paturia ferry terminal yesterday. The ferry service resumed yesterday afternoon.Photo: STAR

Ferry services on Paturia-Daulatdia and Mawa-Kawrakandi routes resumed yesterday following salvage of all the vessels stuck in the hidden shoals of the river Padma.
The operations between Paturia and Daulatdia became normal at about 4:00pm and on Mawa-Kawrakandi route around 5:00pm.
Caught in tailbacks on both sides of the river following the disruption of ferry operations since Friday, passengers from 21 south and southwestern districts underwent untold sufferings.
More than 600 trucks and 500 buses lined up in a six-kilometre long tailback on the road to Daulatdia terminal yesterday, while the queue of 350 trucks and 250 buses stretched three km on the Paturia side, reports our Manikganj correspondent.
Drivers and staff of goods-laden trucks waiting at both terminals were left in the lurch as they ran short of money to buy food.
The operation of ten vessels scheduled to carry at least 200 vehicles from Mawa to Kawrakandi was snapped for six hours after the ferry, Ramshree, got stranded around 12:45am Friday. About 8,000 people suffered immensely due to the service disturbance.
The service started again around 7:00am yesterday after a salvage vessel rescued Ramshree, said Sirajul Haq, Bangladesh Inland Water Transport Authority (BIWTA) manager for Mawa ghat.
But in the afternoon Ro-Ro (roll-on/ roll-off) vessels Barkat and Ruhul Amin and ferry Kapati ran aground, reports our Munshiganj correspondent. All the three vessels were salvaged around 5:00pm.
The transport between Daulatdia and Paturia was stopped for several hours almost every day in the last week as several shoals developed over 150-feet area of the river.
Ro-Ro ferry Keramot Ali left Daulatdia ghat for Paturia with nearly 20 vehicles yesterday around 4:30am and got stuck in a shoal near the No 3 ghat. The route was cleared with the help of rescue vessel IT-389 around 8:00am.
Three stranded ferries -- Bir Shrestha Matiur Rahman, Shah Ali and Shah Makhdum -- were rescued at about 1:30pm.
Another ferry, Bir Shrestha Hamidur Rahman, reached Paturia after it was salvaged around 8:30am. Later, the ferry again got stuck on the way to Daulatdia and was rescued at about 4:00pm.
On the route Nine Ro-Ro and one K-type ferries transport vehicles through a single channel, which was blocked as the ferries got stranded.
The ferries got stuck due to the low navigability of the river, said Ashraf Ullah Khan, manager (commerce) of Bangladesh Inland Water Transport Corporation (BIWTC).
The communication between Dhaka and 21 south and southwestern districts will come to a halt if dredging was not expedited, Ashraf added. He blamed the BIWTA for its slow progress.
Contacted, M Nasim, engineer of BIWTA, said two of their dredgers have been working since Tuesday to keep the channel navigable for ferries. “The channel will be usable for ferries within two to three days.”