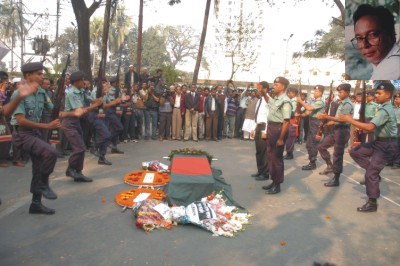 State honours are accorded to noted photojournalist Mohammad Alam, inset, as his body is kept on the National Press Club premises in the city yesterday.Photo: STAR

Noted photojournalist Mohammad Alam passed away due to a cardiac arrest at his residence in the city last night at the age of 61.
A valiant freedom fighter, Alam was the chief photographer of the Daily Ittefaq.
A pall of gloom descended on the Jatiya Press Club (JPC) premises when his body was brought there. His colleagues paid their last tributes, laying down their cameras beside his coffin and observing a minute's silence.
As a mark of respect to a freedom fighter, a police contingent gave him a guard of honour.
The namaz-e-janaza of Mohammad Alam was held on the JPC premises twice.
A large number of people, including political leaders Tofail Ahmed, Rahmat Ali, Saber Hossain Chowdhury and Asaduzzaman Noor, his friends, colleagues, leaders of political parties, journalist unions, press club and photojournalists' association, attended the namaz-e-janaza.
Alam, an effervescent, amiable and ever-smiling person, was an active lensman, who worked till his last day.
He was laid to rest at the Jurain graveyard in the city with state honour yesterday afternoon.
A witness to many national events, Alam began his career with the Daily Azad in 1968. He joined the Mujibnagar Government during the Liberation War in 1971 as a photojournalist.
He joined the Press Information Department in 1972 after independence. Later, he served as a photographer for the then Prime Minister Bangabandhu Sheikh Mujibur Rahman on deputation.
He resigned from the government job in 1975 and joined the Daily Sangbad. Later, he joined the Daily Ittefaq in 1983 as a senior photojournalist.
Staff Correspondent adds: In a condolence message, acting president of Bangladesh Awami League Zillur Rahman and acting General Secretary Syed Ashraful Islam expressed deep shock at the death of Mohammad Alam, says a press release.
They conveyed sympathy to the bereaved family and prayed for the salvation of the departed soul.
Bangladesh Federal Union of Journalists (BFUJ) President Manjurul Ahsan Bulbul, Secretary General Abdul Jalil Bhuiyan, Dhaka Union of Journalists (DUJ) President Altaf Mahmud and General Secretary Omar Faruque in a joint statement condoled his death.
"The country has lost a devoted soul in journalism," they said.
Jatiya Press Club President Shawkat Mahmud and General Secretary Kamaluddin Sabuj also expressed deep shock at his death.
AKM Mohsin and Mir Ahmed Miru, president and general secretary of the Bangladesh Photojournalists' Association, also condoled the death of the eminent photojournalist.