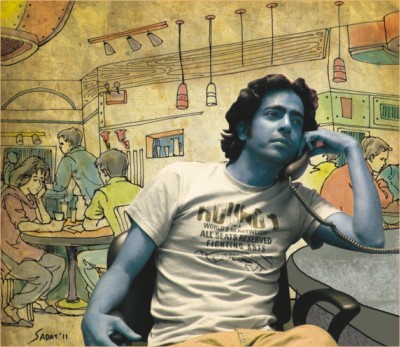 Bappa Mazumder, frontman of the band Dalchhut, is one of the leading contemporary musicians in the country. His song "Pori" remains among the most popular songs of recent years. Bappa was the guest celebrity at DS Café recently and fans had the opportunity to speak to him over the phone.
Barsha, Jahangirnagar University: Where did you study?
Bappa: I passed my SSC exams from Wills Little Flower and did my HSC from Notre Dame College. I did my graduation from Dhaka City College.
Sagar Chowdhury, Sylhet: Which is your most favourite song?
Bappa: Many songs are close to my heart. But at the moment, the song that comes to my mind is Shonjibda's (Chowdhury) "Ki Amake Diyechile Bangoposhagor". I love that song!
The Daily Star (TDS): Being the son of Barin Mazumder -- a pioneering classical musician and the founder of music college, did you start off with classical music lessons?
Bappa: My first lessons were Sa-Re-Ga-Ma, but I learnt the ABCs of music through classical lessons. I completed a five year course at my father's music school, called Monihar Sangeet Academy. I've also learned about that genre from my family.
TDS: Did you receive further training on traditional Bangla songs as well?
Bappa: Not really. I picked up a few Rabindra and Nazrul songs from my mother. But I've never gone through any formal training. I was more of a wild child. I always hastened away before learning a whole song, saying: "I'm done!"
TDS: The songs performed by you mostly belong to contemporary genres. How did you get into that?
Bappa: The funny thing is, although classical music dominated my home-sphere, when I was young, my elder brother Partha Pratim Majumdar and his friends rehearsed songs for the Red Cross using many western instruments. And that fascinated me. If it wasn't for him, I wouldn't get the chance to sample global music. I also listened to artistes like Bhupen Hazarika, Manna Dey and Kishore Kumar. I think these are the reasons behind my musical preference.
TDS: Were you involved with any other band before joining Dalchhut?
Bappa: I had a band before, but that was just a couple of college friends getting together for jamming. It was called 'Chain'. We never performed live, but got together for the heck of it and were even able to record an album! But that was that. We were never really serious. However, I started my solo career before joining Dalchhut. My first solo album "Tokhon Bhor Bela" came out in 1995, even before I joined Dalchhut.
TDS: Which is more important to you now, Dalchhut or your solo career?
Bappa: Both are equally important to me. But sometimes I prioritise Dalchhut as I have a deep attachment to the band. I never perform live as a solo artiste.
TDS: You've done some acting as well…
Bappa: I wouldn't go as far as to call that acting. I did exactly what I'm doing now: sitting and having a little chat. That's it! I played myself.
TDS: Your take on the crises that the audio industry is facing now?
Bappa: Piracy is the biggest challenge for the industry now. Free downloading from the Internet has become a bigger threat than pirated CDs. This issue needs to be dealt with sternly. The key industry players always tell us that business is going downhill. The payments are delayed now more than ever. Their claims are somewhat justified as CD sales are seeing a slump. When a person has the option of getting something for free, he/she wouldn't likely spend any money on it. The websites that offer free downloads need to be shut down and the authorities concerned should step up to implement the law.
TDS: Free downloading is a global phenomenon. How are artistes in other countries surviving its effect?
Bappa: Producers in many other countries are honest to the system. The rightful payments are ensured to the artistes, writers and composers. But we don't have that practice here.
TDS: It seems that the music industry is fragile on the inside!
Bappa: I couldn't agree more. It's always the artiste who is cheated; composers and lyricists, who are denied.
TDS: What about royalties?
Bappa: There is no proper system for that in our country.
TDS: Do you miss Shonjibda?
Bappa: I miss him all the time.
Monir, Pangsha, Rajbari: How did you step into the media?
Bappa: It's a tough question. There is one person who needs to be acknowledged for bringing me to the media. That is Hasan Abidur Reza Jewel.
TDS: Any update on your new album?
Bappa: Work's proceeding but haven't decided on the title yet. I'm trying to bring something fresh with this latest effort.
TDS: Who do you think are the top performers of the time?
Bappa: Habib is doing tremendously well. Fuad is also excellent. I like listening to the music of Arnob too. Hridoy is also quite promising. All of these artistes are my favourites.
Shumona, Narayanganj: You have a brilliant voice. May I know your date of birth?
Bappa: Thanks Shumona. February 5.
................................................................
Transcribed by Shah Alam Shazu