FF Lokman sets up gallery with photos of glory days 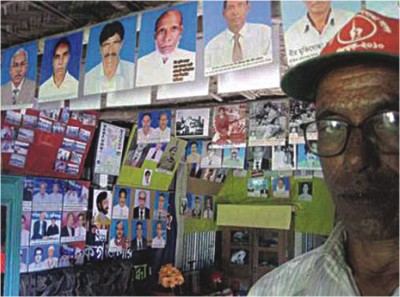 Freedom fighter Lokman Hossain, locally known as Tiger Lokman, has set up a gallery at his Ashapur village house in Ghior upazila of Manikganj district to preserve and display the photographs commemorating the glorious role of his fellow freedom fighters and himself during the turbulent days of the Liberation War.Photo: STAR

Freedom fighter Lokman Hossain has set up a gallery with the photos of his glorious days of battle during the War of Liberation in 1971 and fellow freedom fighters at his home at Ashapur village under Ghior upazila.
As many important photos are there in the gallery, he has sought government's support to maintain it.
Lokman Hossain, locally known as 'Tiger' Lokman, led a fierce battle against the Pakistani occupation Army at Golaidanga village in Singair upazila on October 28, 1971. At least 83 Pak soldiers were killed.
He was in the Army at Chittagong Cantonment in 1966. Leaving the force, he joined the liberation war at the end of April in 1971.
"I went to Captain Abdul Halim Chowdhury at Sutalari village under Harirampur upazila in the district,” recalled Lokman Hossain while talking to this correspondent recently.
“He sent me to Singair with two others. As per his order, we went to the house of Salam, brother of language martyr Rafique Uddin Ahmed, at Paril village, by a boat in the month of June," Lokman narrated adding, "We joined Engineer Tobarak Hossain Ludu there. Then we recruited 35 young men from the village and neighbouring areas."
We took position at Golaidanga around 7:00am on October 28 as Kismot Munshi of Paril village informed us that the Pak soldiers were coming by seven boats. As soon as they came close, we fired on them and 83 Pak soldiers drowned in the river, he said. "We later recovered 54 arms including LMG, Chinese rifle, mortar shell etc. from the spot".
Zahidur Rahman, Pannu, Yakub, Tobarak Hossain Ludu, Wazed, Lutfar, Mahadev, Bhabesh, Maznu, Zahangir, Ginu and a few other freedom fighters were with me, he added.
In the evening, the occupation forces come to the spot with helicopter. They recovered the bodies and took them to Dhaka.
Lokman was born on January 2 in 1946. He is the youngest of five children of late Nesu Mia and late Antema Begum.
The valiant freedom fighter and his wife Firoza Begum have a son and a daughter. Their son Lemon is doing a private job in Dhaka after passing SSC examination and daughter Beauty Akter got married earlier.
"I am now worried whether I can maintain the gallery as I have got no financial support", Lokman said.