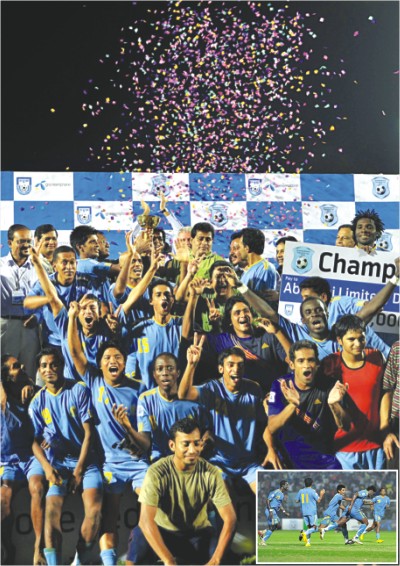 Abahani lifted the trophy of the season's curtain-raising tournament Grameen-phone Federation Cup for the eighth time as they beat a star-studded Sheikh Jamal Dhanmondi Club 5-3 in the final at the Birshreshtha Mostafa Kamal Stadium yesterday.
Abahani's Ghanaian recruit Awudu Ibrahim scored a brilliant hattrick and his compatriots Twum Frank and Yussif Aminu scored one each while Enamul Haque scored two for Sheikh Jamal while Mamunul Islam scored the other. The score at regulation time was tied 3-3.
The match lived up to the billing as the two clubs fought out a thoroughly entertaining battle in front of a full-house. The sides battled neck and neck for the ninety minutes and were squared off at full time in a thrilling 3-3 tie.
However, the difference was probably made in extra time after the Sheikh Jamal defender Rezaul Karim saw red for a second bookable offence. Abahani strikers pounced on the feeble Sheikh Jamal backline late in the game and scored two more goals to snatch victory.
This win broke a 10-year jinx for the Sky Blues as the defending professional league champions' last triumph in the tournament came way back in 2000.
Abahani fielded the same eleven that won against Brothers Union in the semifinal, while Jamal brought three changes to their starting line up from the semifinal eleven against Muktijoddha Sangsad. They started with their favoured formation of 4-2-3-1 with out-of-touch striker Zahid Hasan Emily once again starting as the lone man up front, while behind him the attacking trio of Zahid, Enamul, and Kamol operated.
In the early exchanges, Abahani made more of an impression with their possession game and created more chances with good buildup and movement from midfield to attack
First to strike though were Sheikh Jamal on the half-hour mark and against the run of play.
Abdul Baten Kamol made a dummy inside the box on a Zahid Hassan square-pass to let it reach poacher Enamul Haque inside the edge of the box. The former Abahani striker finished with a fierce left footer to give the new powerhouse of local football the lead.
But it took the Sky Blues only a minute to strike back and draw level. It resulted from a fumble from Rezaul that allowed an unmarked Awudu to pounce on and finish with a clinical effort.
Two minutes after the breather, Sheikh Jamal were back in the lead and once again through the best striker of the country, Enamul. His strike partner Emily, who had an otherwise mute evening and was later substituted, floated a cross for Enamul who saw the goalkeeper advancing and calmly headed the ball inside the far post.
Just like the first goal, Abahani hit back again within a minute and this time it came from another defensive error from Sheikh Jamal. The clumsy hands of Zahid Hossain inside the box gifted Abahani with a penalty and their Ghanaian striker Frank sent Aminul the wrong way to bring the Sky Blues level.
Abahani then went in front in the 80th minute with Awudu hitting his second of the night. He was left unmarked on the end of an inviting cross from the right and beat Aminul from close range.
But just when it looked like their experience would see the game through, Abahani conceded. Sheikh Jamal's equaliser seven minutes later came from Mamunul Islam and what a goal it was. The midfielder unleashed a sublime left-footer from the edge of the box giving no time for Abahani custodian Zia to react and take the game into extra-time.
Sheikh Jamal had an even later chance to win the game but substitute Shakil Ahmed missed an easy chance right before the final whistle and he might rue that opportunity for a long time.
The ball had fallen kindly to the substitute after a fumble from Siraji at the Abahani backline, and an advancing keeper presented Shakil with the goal almost at his mercy. But to the frustration of the Sheikh Jamal faithful, he put the ball sailing over the bar.
Sheikh Jamal were dealt a fatal blow in the 14th minute of extra time when Rezaul was sent-off for callously putting the ball out of play even after the whistle had gone.
Abahani made full use of the extra man and found the back of the net again with nine minutes remaining to the final whistle. This time the third of Abahani's three Ghanaian recruits, Yussif Aminu scored, beating Aminul from a goalmouth melee. The keeper of the national side got his hand on to the ball, but could not stop the ball from rolling into the back of the net.
Awudu Ibrahim put the final nail on the Sheikh Jamal coffin and completed a well-deserved hattrick with a clinical finish on the stroke of the end of extra time. Amit Khan Shuvro, who had been on the field for hardly two minutes, played a lob from midfield that found Awudu on the end of it. The predator from Ghana received the ball with his left foot, turned back and unleashed an exquisite volley with his right, giving a hapless Aminul no time to react.
The best custodian in the country gathered the ball out of the net and soon the final whistle was blown, to the euphoria of the Sky Blues faithful.
TEAMS
ABAHANI: Ziaur Rahman, Mamun Miah, Samad Yussif, Ashraf Ahmed Lincoln, Mohiuddin Ibnul Siraji (Amit Khan Shuvro), Pranotosh Kumar Das, Yusif Aminu, Imtiaz Sultan Jitu (Habibur Rahman Shohag), Mehedi Hassan Uzzal (Arup Kumar Baidya), Awudu Ibrahim, Ntim Twum Frank.
SHEIKH JAMAL DHAN-MONDI CLUB: Aminul Haque, Rezaul Karim, Zahid Hasan Emily (Towhidul Alam Sabuj), Enamul Haque, Waly Faisal (Dragon Perisic), Nasirul Islam, Mintu Sheikh, Abdul Baten Kamol (Shakil Ahmed), Zahid Hossain, Atiqur Rahman Meshu, Mamunul Islam.