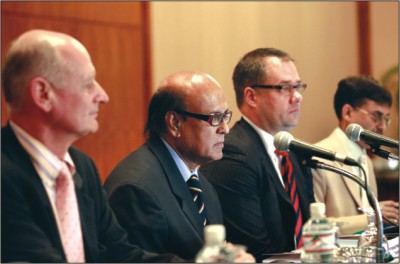 Khandker Mahbub Hossain speaks at a seminar in Sonargaon Hotel in the city yesterday. On his right is Steven Kay QC and on his left are Toby Cadman and Md Badruddoza.Photo: STAR

Bangladesh will come under widespread international criticism if the trial of war criminals is held under the International Crimes (Tribunals) Amendment Act 2009, which is not in conformity with international standards, said speakers at a seminar yesterday.
Steven Kay QC, one of the two-member delegation from the United Kingdom, said, “The current system of war crimes trial and its law in Bangladesh does not include international concerns, required to ensure a fair, impartial and transparent trial.
“You are importing things like 'international crime' but exporting your national and fundamental human rights. You are open to great criticism”.
Bangladesh Supreme Court Bar Association (BSCBA) organised the seminar titled “Human rights: Perspective Bangladesh” at hotel Sonargaon in the afternoon.
Steven, who appeared before the International Criminal Tribunals for Yugoslavia and Rwanda, said the present act does not ensure equality of all before the law.
He also blamed the first constitutional amendment made in 1973 as a reason behind this situation.
In his presentation titled “Bangladesh, its constitution & the International Crimes (Tribunals) (Amendment) Act 2009”, he said tribunals and jurisdiction over crimes committed before or after the commencement of the act has challenged universal principle.
He also mentioned that the current act lacks clear and elaborate definition into what it means with “International Crimes,” “Genocide” and “Crimes Against Humanity.”
He cautioned over the source of collecting the evidence in proving the crime and said from international point of view, evidences only from the government, the United Nations and other international organisations are accepted in this regard.
He also expressed concern over the lack of the rights to challenge and inability to request the tribunal to be accountable for its conduct in the act.
He expressed concern whether people appointed for the trial, both in prosecution and judgement, are trained and eligible enough to hold such a technical trial.
Replying to a question regarding media being over-enthusiastic in covering the War Crimes Trial, he said, “It's important that the media are educated and informed on the issue. This is a technical subject, not just a description of an event.”
“It is the court not the government which should be committed to holding trial of the war criminals,” said Toby Cadman, who was head of the prosecution section of War Crimes in Bosnia and Herzegovina, referring to a recent government statement that they (the government) are committed to hold trial of war criminals.
“It is a show of trial as they (the government) are saying that it is their electoral pledge. War crimes trial must not be conducted to oppress opposition parties. The International Crimes Tribunal Act must be amended in conformity with international standard,” said BSCBA President Khandker Mahbub Hossain.