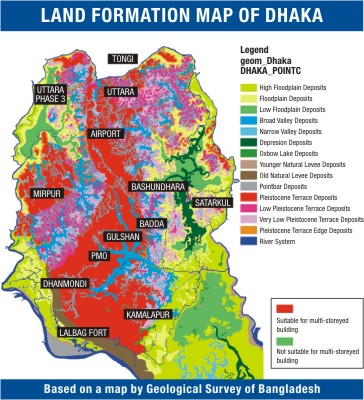 High-rises on once marshy lands in the capital are at risk of falling over, as the groundwater level is dropping faster than ever.
It may not even need an earthquake for these multi-storey buildings to come tumbling down. Heavy rains after a long spell of dry weather may prove enough to make them topple over, said geological experts.
Mentioning the collapse of a building at Begunbari and tilts of several more in last few days, they said it all happened because the monsoon rains led to an 'upward water pressure' amid a falling groundwater level.
Explaining how that pressure is created, the experts said if the water level falls, the soil under the buildings adjusts itself to being without water.
But when it rains heavily after a long break, the groundwater water pushes the rainwater upwards, causing a movement on the ground.
ATM Asaduzzaman, director of Geological Survey of Bangladesh, said many multi-storey buildings on weak foundations and filled-up wetlands might collapse if heavy rains continue for a few days at a stretch.
The groundwater level in the city has been going down by three metres a year, says a survey conducted by Bangladesh Agricultural Research Council and Water and Sewerage Authority.
Experts blame the fall on excessive extraction of water.
Geologist Khurshid Alam said Dhaka city stands on three categories of soil.
The oldest of them is Pliocene or Dipu Tila Sand. It was formed 35 lakh years ago and is safe for multi-storey buildings.
Pleistocene or Madhupur clay, formed six to seven lakh years ago, is less stable.
Holocene or recent sediments, formed only 10,000 years back, is most unstable of the three formations.
Low-lying areas like Begunbari, Basabo and Meradia are on Holocene formation.
Citing a recent survey over 60 square kilometres of filled-up land on the bank of Balu river in Satarkul, Asaduzzaman said some areas are so vulnerable that buildings on them could fall over despite 80 metres of piling.
The urban geology expert stressed the importance of soil tests before constructing multi-storey buildings. But unfortunately most of the building owners skip the tests to save money.
Most areas in Motijheel, Sayedabad, Kamalapur, Segunbagicha, Kakrail, Banani, Gulshan, Dhanmondi, Lalmatia, Khilkhet, Baridhara, Agargaon, Mirpur 1-3, 6, 10-12 sections and parts of Uttara and Uttarkhan are relatively safe for high-rises, as they are made of Madhupur clay.
But, Asaduzzaman adds, buildings in areas like Satarkul, Jatrabari, Meradia, parts of Badda, Mirpur Kalapani and Mirpur 14 are vulnerable, as most of these places were wetlands in the near past.
“In some cases, even if we wait for 10,000 years, the land won't be stable enough for high-rise buildings,” he noted.
The vast stretch of low-lying land between Purbachal and Begunbari area, where over 100 developers are filling up wetlands and selling plots to people, is a matter of great concern, say geologists.
Khurshid Alam said it is unfortunate that even reputed developers are building large structures on shaky land formation like Holocene.
“People should not build any high-rise in those areas. They can at best go for bamboo and wood-made duplexes,” he continued.
Asked how long the multi-storey buildings in areas on Holocene might take to tilt or topple, he said it maybe tomorrow or after 10 years. But there's no doubt that those buildings are prone to cave-ins.
Queried what then the solution is, he said there's no alternative to decentralisation. The capital must not have a population beyond its capacity.
Professor Nazrul Islam, a noted urban expert said, every year Dhaka city is expanding by four percent and its population is increasing at the same rate.
Decentralisation will not be enough; the government should discourage local migration as well, he added.