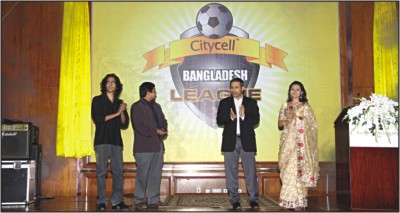 Holders Abahani will host newcomers Beanibazar SC in the opening day of the Citycell Bangladesh League on Sunday at the Bangabandhu National Stadium.
The announcement came at the logo unveiling ceremony of the Bangladesh League, the country's professional football league, at a city hotel yesterday. Representatives from all 13 participating teams were present at the ceremony followed by a stage show by singer Bappa Majumder.
Players from the clubs also took part in a catwalk.
The third edition of the league will see the previous name of B. League revert to the more conventional Bangladesh League to avoid confusion as the word 'B' often has the negative connotation of been considered as the second category meet.
Title contenders and Federation Cup champions Mohammedan will face Feni Soccer Club on Oct 26.
Club Cup champions Shuktara Jubo Sangsad of Narayanganj have been placed just behind last season's bottom finisher Muktijoddha Sangsad while Club Cup runners-up Feni Soccer Club and BFF choice Beanibazar SC filled the remaining spots.
With the inclusion of three new teams, the matches will also be played in Sylhet, Narayanganj and Feni while the venue of Khulna was dropped following the demotion of Khulna Abahani KC.
"We must admit we have to face a little problem to run the league ahead of the national team's preparation for the SAFF Championship in December and South Asian Games in January-February next year and we seek cooperation from all participating teams," said Salam Murshedy, chairman of the Bangladesh League as well as BFF senior vice president.
For the sake of the preparation of the Bangladesh national football team, the Bangladesh League will be played for the first three rounds and then the league will be suspended until the finish of the SAFF Championship, scheduled for December 4-14 in Dhaka.
1ST RD FIXTURE
Oct 25: Abahani vs Beanibazar at BNS
Oct 26: Mohammedan vs Feni Soccer Club at BNS
Oct 27: Sheikh Russel vs Shuktara Jubo Sangsad at BNS
Oct 28: Brothers Union vs Muktijoddha Sangsad at BNS
Oct 29: Ctg Mohammedan vs Arambagh KS at Ctg Stadium
Oct 29: Farashganj vs Ctg Abahani at BNS