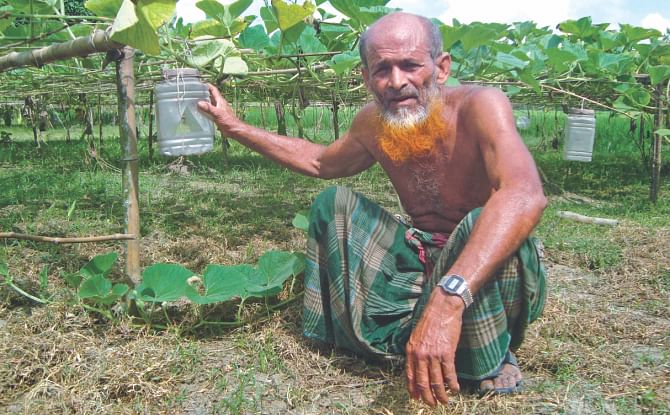 Farmer Helal next to his pumpkin field where pheromone traps are used to kill insects. Photo: Star

Helal Uddin, 60, was a poor farmer of Mahashwerchanda village in Kaliganj. Back in 2000, he struggled to survive by growing crops on 40 decimals of his own land and 50 or 60 more decimals of leased land.
Things, however, began to change since when Dr MA Gul Hossain, an agricultural scientist, invited him and some other farmers of his village. Hossain trained them to make vermicompost, a natural fertiliser made of cow dung and banana trees with the assistance of earthworms.
“People were not interested to buy it initially. So I began using it on my crops,” said Helal.
However, it did not take him long to make the concept popular to others. Meanwhile, Hunger-free World, an NGO, came to know about this initiative in the village and arranged for training more farmers in natural compost in 2003.
“I was hired to train other farmers in vermicompost,” Helal said, adding that his expertise increased his income.
He then set up a bigger compost plant to expand the business.
As the idea of natural farming expanded, some farmers came up with the thought of making a bio-pesticide, a “Balainashak”, from juice extracted from neem and mahogany trees.

“We used Balainashak till 2010. Although some still use it, most others have opted for pheromone,” he said.
Mahashwerchanda thus has become a milestone in natural farming. Both in terms of fertilisers and pesticides, farmers of this village rely on nature instead of harmful chemicals. Farmers from neighbouring villages are also following suit.
“Even farmers from nearby districts come to buy vermicompost from us,” he said.
In the span of a little more than a decade, Helal Uddin now owns seven acres of land and his monthly income stands at Tk 50,000 from the sales of compost and vegetables.
“I have never given up since I learnt natural farming. The most important thing about it is: it protects soil, environment and above all, the health of people,” he said.
The vegetables he produces are mostly sold locally. A businessman from Dhaka also buys vegetables from him. Sometimes, though, his vegetables remain unsold in the local markets.
“If there is a market arrangement to sell the vegetables grown naturally, our products could be sold at better prices,” he added.