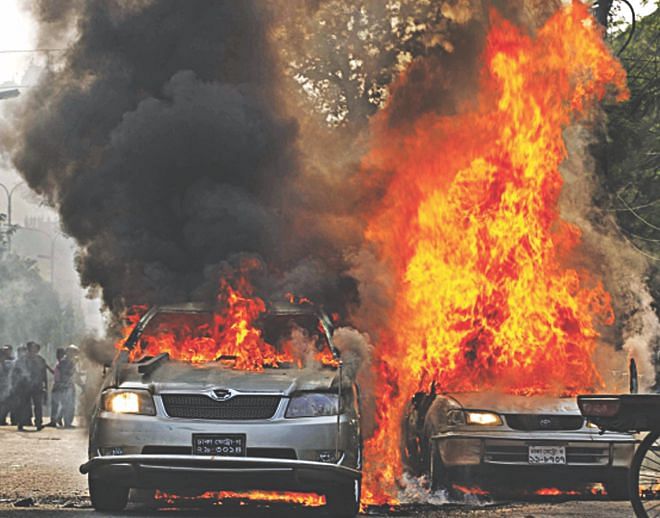 THE recent violence in Bangladesh may appear random to the casual observer, but is nothing of the sort. It is the result of a coordinated campaign by Islamist extremists to destroy the country's democracy and cleanse it of religious minorities -- including Christians, Hindus and Buddhists.
Extremists attacked a Catholic community in northern Bangladesh, beating residents and burning their houses because they dared to vote in this month's parliamentary elections, according to Asia News.
A young Catholic activist named Ovidio Marandy led a demonstration to protest. His reward? Islamists returned and murdered him.
Jamaat is Bangladesh's most violent Islamist organisation and is responsible for much of the bloodshed that has engulfed the country. Marandy is one of the hundreds of victims of Jamaat and smaller extremist groups who instigated mayhem before and after the elections. I have seen their gruesome handiwork in person when talking to victims at Dhaka Medical College Hospital.
It would be bad enough if Jamaat were nothing more than a militia of domestic terrorists. But it is far worse. The Bangladesh Nationalist Party (BNP), the country's major opposition force, has endorsed Jamaat's reign of horror as a means of unseating the ruling Awami League party and Sheikh Hasina.
If Bangladesh is to remain a pluralistic democracy, the BNP must disavow Jamaat and join the government in efforts to prosecute those responsible for its criminal acts. At the same time, foreign governments and international human rights advocates should urge the BNP to cut ties with Jamaat, its student wing Islami Chhatra Shibir and other violent Islamists groups such as Hefajat.
In the days preceding the elections, Jamaat gang members assassinated a political official outside the capital city of Dhaka and then, in a grotesque display of boldness, went to a nearby sweet shop to wash the blood from their clothes. Hours later, they chased another politician through crowded streets and hacked him to death with machetes in a busy bazaar.
More than 230 Bangladeshis have been killed by Jamaat violence since last autumn and more than 1,500 have been injured. Jamaat has trained female assassins.
When they are not engaging in murder in broad daylight, Jamaat criminals have rolled across Bangladesh in a coordinated wave aimed at mass destruction of government offices and private property. Awami League offices and government polling stations were among their targets, but their catalogue of carnage was indiscriminate and shocking in its scope.
Jamaat supporters have sabotaged railway tracks and derailed and set passenger trains ablaze. They destroyed a rural power station, cutting off electricity to many small villages. They have ransacked hundreds of shops, turned a car park full of government cars into an inferno and made Dhaka streets impassable by littering them with flaming tyres. Property damage has run into the hundreds of millions of dollars.
Jamaat has focused some of its most extreme violence on Bangladesh's Hindu minority. It has beaten Hindus with iron rods, set fire to their houses and temples, desecrated their idols and driven them out of the country.
The headline last year in a Dhaka-based newspaper said it all: “City Turns into Battlefield.”
Jamaat opposed Bangladesh's 1971 independence from Pakistan and its leaders committed atrocities against the Bangladeshi people during the war. Some of those war criminals now face charges before a tribunal in Dhaka. Several have been found guilty and face punishment. These verdicts have been given as a reason for the BNP's endorsement of Jamaat's reign of terror. But it is only pretext. Jamaat hates Bangladesh's constitutionally protected pluralism. Even without the tribunals, Jamaat would be a sworn enemy of democracy and an agent of chaos.
The government of Bangladesh would welcome a change in the BNP's stance on Jamaat. But it must do more than alter its rhetoric.
The BNP must turn its back on its partner and only then will it have credibility in the eyes of the international community and, most importantly, the Bangladeshi people. They are the ones who have borne the brunt of Jamaat brutality and they are the ones who have buried friends and family as a result of its atrocities.

The writer is founder of the South Asia Democratic Forum
© The Nation (UAE).