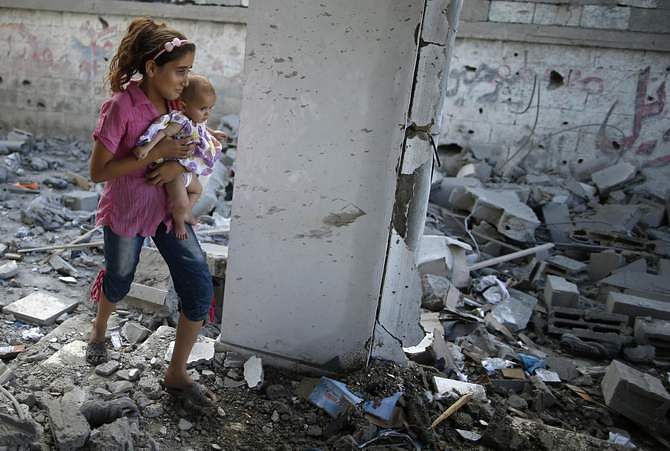 A Palestinian girl holding her sister walks through debris near remains of a mosque, which witnesses said was hit by an Israeli air strike, in Beit Hanoun in the northern Gaza Strip August 25, 2014. Photo: Reuters

Gaza police say Israel has bombed two large high-rise buildings in Gaza City, with dozens of homes and shops — an escalation in the seven weeks of fighting with Hamas.

Police say the 15-floor Basha Tower with apartments and offices was leveled in Tuesday's attack. The second building, the Italian Complex with 72 apartments and 60 stores, was badly damaged.

The towers were evacuated before the attacks. A Gaza health official says 25 people were wounded in the strike on the Italian Complex.

Israel says it targeted sites linked to militants, but made no references to the two buildings. Israel alleges Hamas often operates from civilian locations.

This is the second time since the weekend that Gaza high-rises have been toppled in an apparent attempt to increase pressure on Hamas.