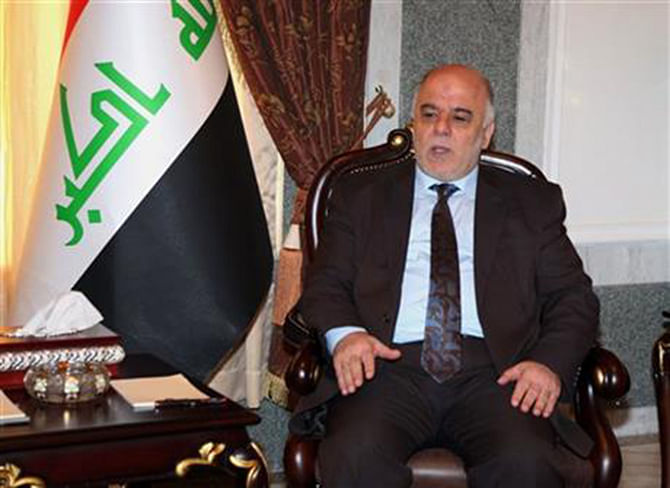 Iraqi premier-designate Haider al-Abadi meets with Pastor Farouk Yousuf in Baghdad, Iraq, Thursday, August 21, 2014. Al-Abadi has until Sept. 11 to submit a list of Cabinet members to parliament for approval. Religious and ethnic minorities have called upon him to assemble an all-inclusive government. Photo: AP

A suicide bomber and several gunmen attacked a Sunni mosque in a volatile province outside Baghdad during Friday prayers, killing at least 64 people and wounding more than 60, officials said.
It was not immediately clear if the attack was carried out by Shiite militiamen or the Islamic State extremist group, which has been advancing into the ethnically and communally mixed Diyala province and has been known to kill fellow Sunni Muslims who refuse to submit to its leadership.
An army officer and a police officer said the attack on the Musab bin Omair Mosque in Imam Wais village, some 120 kilometers (75 miles) northeast of Baghdad, began with a suicide bombing near the entrance, after which gunmen poured in and opened fire on the worshippers.
Officials in Imam Wais said Iraqi security forces and Shiite militiamen raced to the scene of the attack to reinforce security but stumbled upon bombs planted by the militants, which allowed the attackers to flee. Four Shiite militiamen were killed and thirteen wounded by the blasts.
The officials said Islamic State fighters have been trying to convince two prominent Sunni tribes in the area — the Oal-Waisi and al-Jabour — to join them, but that they have thus far refused. The nearby towns of Jalula and al-Saadiyah have recently fallen to the Islamic State group.
Virtually all suicide bombings in Iraq are believed to have been carried out by Sunni militants, but Shiite fighters used the tactic in Lebanon during that country's civil war. In the immediate aftermath of a large explosion, it is often not clear whether it was caused by a suicide bomber or an explosive device.
Two medical officials confirmed the casualty figures. All officials spoke on condition of anonymity because they were not authorized to brief the media.
Since early this year, Iraq has been facing an onslaught by the extremist Islamic State group and allied Sunni militants. The crisis has worsened since June, when the group seized Iraq's second largest city of Mosul, in the north.
In Diyala, Islamic State fighters have clashed with Kurdish forces guarding disputed territory claimed by the Kurdish regional government in the north. The extremist group pushed Kurdish forces out of the nearby town of Jalula earlier this month after heavy fighting.
The Islamic State group has also clashed with Shiite militiamen and security forces loyal to the Shiite-led government in Baghdad. At the height of Iraq's sectarian bloodletting in 2006-2007 the province was among the country's most lethal areas.
Elsewhere in Iraq on Friday, the country's top Shiite cleric again called upon national leaders to settle their differences in a "realistic and doable" manner and swiftly form a new government to confront the Sunni insurgency.
Grand Ayatollah Ali al-Sistani said the next government should be made up of candidates who care about "the country's future and its citizens" regardless of their ethnic and religious affiliations.
Al-Sistani warned that politicians' "demands and conditions could derail the forming of the new government."
The reclusive cleric's remarks were relayed by his representative, Abdul-Mahdi al-Karbalaie, during Friday prayers in the Shiite holy city of Karbala.
Iraq's premier-designate, Haider al-Abadi, has until Sept. 10 to submit a list of Cabinet members to parliament for approval, but such deadlines have often passed without action because of political wrangling.
Al-Karbalaie also called for urgent aid to be airlifted to residents of a small Shiite town which has been besieged by Sunni militants in northern Iraq.
About 15,000 Shiite Turkmen in the town of Amirli have been under a tight siege and are running out of food and medical supplies. The town is located about 170 kilometers (105 miles) north of Baghdad.