From cynicism to enjoyment 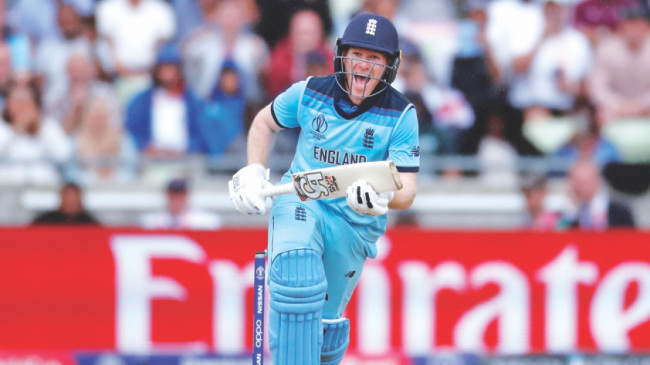 England captain Eoin Morgan wasted no time setting off in celebration after scoring a boundary to complete their chase of a sub-par 224-run target set by Australia in the second semifinal of the World Cup at Edgbaston yesterday. Photo: Reuters
Sakeb Subhan Sakeb Subhan

Before the World Cup began, West Indies legend Viv Richards said during a pre-tournament function that somewhere along the line, favourites England would mess it up. That was the general consensus; no matter how good they look, the three-time runners-up would find a way out of the tournament. When they lost successive matches to Sri Lanka and Australia in the league phase, it seemed that the time to exit had arrived. When it emerged that Australia would be their semifinal opponents, it was widely assumed that that would be it.

But the England who have often failed in crunch moments in the World Cup never showed up. In a ruthlessly aggressive display, they brushed aside the Aussies -- who had never been beaten in a semifinal before -- with plenty of time and effort to spare. As the Edgbaston crowd sang popular songs in unison and cheered every run that reduced the gap between England and a first World Cup final since 1992, it seemed that the long-held cynicism surrounding the team was also dissipating.

“Everybody out there on the field and even in the changing room loved every ball that was bowled,” Morgan said after the eight-wicket win. “There was no lack of commitment, application and we had a bit of a day out.”

The Irish-born Morgan was not around when the side were routine also-rans in World Cups in the 1990s and 2000s, but said that he understood the cynicism and saw it as a national trait.

“I think we’re quite cynical people, who never quite give people credit when it’s due,” said Morgan with a smile. “There’s always a different side to it. We grow up around it. It is the way we are and we sometimes enjoy it too much.

“I think us, as a team, we have learnt to enjoy ourselves, particularly days like this, even if they don’t go well. If you had offered us the position to play in a final the day after we were knocked out of the 2015 World Cup, I would have laughed at you.”

England were knocked out of the group stage of the 2015 World Cup after a defeat to Bangladesh in Adelaide. Morgan, who started his captaincy stint in 2015, had said earlier in the tournament that the early exit had caused a rethink of their ODI cricket and created the fearless team that regularly scores over 300.

The media hype surrounding English teams is always high, and yesterday being exactly a year after England were booted out of the 2018 FIFA World Cup, a journalist asked Morgan whether the Cup ‘was coming home’

“I wouldn’t get too carried away yet. It is obviously a very exciting time for everybody and ourselves included. I think giving ourselves the opportunity for Sunday’s final is brilliant. I think Sunday’s not a day to shy away from, it’s a day to look forward to, much like today. We have created the opportunity to play in a World Cup final. It will be a matter of the same again trying to produce everything that we can performance-wise, but enjoy the day.”

“Today was close to a perfect performance. Chris Woakes and Jofra Archer bowled a hell of a spell. This final is a huge opportunity for us. Making the most of it would be brilliant but getting to the final alone is awesome”