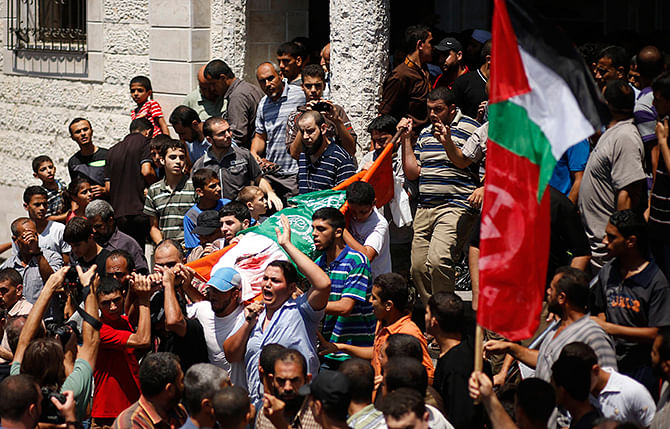 Mourners chant slogans during the funeral of the wife of Hamas's military leader, Mohammed Deif, his infant son Ali and other Palestinians whom medics said were killed in Israeli air strikes, in the northern Gaza Strip August 20, 2014. Photo: Reuters

Hamas says the wife and child of its military commander, Mohammed Deif, have been killed in an Israeli air strike on the Gaza Strip.
At least 19 Palestinians have died since hostilities resumed on Tuesday, with both sides blaming each other for the collapse of the Cairo peace talks.
The Israeli military said it had carried out 92 air strikes in response to 137 rockets fired at its territory.
Six weeks of fierce fighting have left at least 2,103 people dead.
Egypt has expressed "profound regret" at the end of the 10-day period of calm and said it will continue trying to secure a lasting truce.
BOMB SHELTERS
It is believed the air strike on a house in Gaza City late on Tuesday that killed Mohammed Deif's wife and their young son was intended to kill the militant himself, reports the BBC's Kevin Connolly in Jerusalem.
The commander of Hamas' armed wing, the Izz al-Din al-Qassam Brigades, has survived a number of previous Israeli assassination attempts believed to have left him with severe disabilities.
Israeli Interior Minister Gideon Saar said the attack was justified because Mohammed Deif was "personally responsible" for dozens of deaths.
Yaakov Perry, Israel's science minister and former security service chief, said he was "convinced that if there was intelligence that Mohammed Deif was not inside the home, then we would not have bombed it".
Rescue workers later pulled out of the remains of the house the bodies of three members of the family that lived there, medics said.
Another air strike early on Wednesday killed eight people, including a heavily-pregnant woman and three children, in the central Gaza town of Deir al-Balah, emergency services spokesman Ashraf al-Qudra told the AFP news agency.
Later, a man and child were killed in Zeitoun in southern Gaza City, and two militants died when a missile hit their motorcycle in the northern town of Beit Lahiya, Qudra added. The IDF said it had targeted two militants responsible for launching rockets in the area.
Our correspondent says the apparent attempt to kill Mohammed Deif may explain the intensity of the rocket fire that came after the collapse of the Cairo peace talks.
Air-raid sirens sounded in many towns and cities in southern and central Israel, including Tel Aviv and Jerusalem, as 50 rockets were launched on Tuesday and 30 on Wednesday.
One hit a home in the Hof Ashkelon region, but no injuries were reported.
Israel's Iron Dome anti-missile system has shot down a number of incoming rockets, but the Israeli authorities have ordered the re-opening of bomb shelters within 80km (50 miles) of Gaza.
‘GRAVELY DISAPPOINTED'
The Israeli government accused Hamas of breaking the ceasefire by launching a salvo of rockets about eight hours before it was to have expired, and told its delegation in Cairo to return home shortly afterwards.
Palestinian negotiators blamed Israel for the failure of the indirect talks.
"Israel thwarted the contacts that could have brought peace," said Azzam al-Ahmed, a senior member of the Fatah movement of Palestinian Authority President Mahmoud Abbas.
However, Israeli government spokesman Mark Regev rejected the accusation.
"The Cairo process was built on a total and complete cessation of all hostilities and so when rockets were fired from Gaza, not only was it a clear violation of the ceasefire but it also destroyed the premise upon which the talks were based," he told the Reuters news agency.
Israel has been seeking guarantees that Hamas and other factions in Gaza would be disarmed, while the Palestinians were demanding an end to the Israeli and Egyptian blockades of Gaza, and the establishment of a seaport and airport.
UN Secretary General Ban Ki-moon said he was "gravely disappointed by the return to hostilities".
Israel launched Operation Protective Edge on 8 July with the aim of ending rocket fire. It also sought to destroy tunnels dug under the frontier with Israel used by militants to launch attack.
Since then, at least 2,036 people, most of them civilians, have been killed in Gaza, according to the Palestinian health ministry. The Israeli authorities say 64 Israeli soldiers have been killed, along with two Israeli civilians and a Thai national.