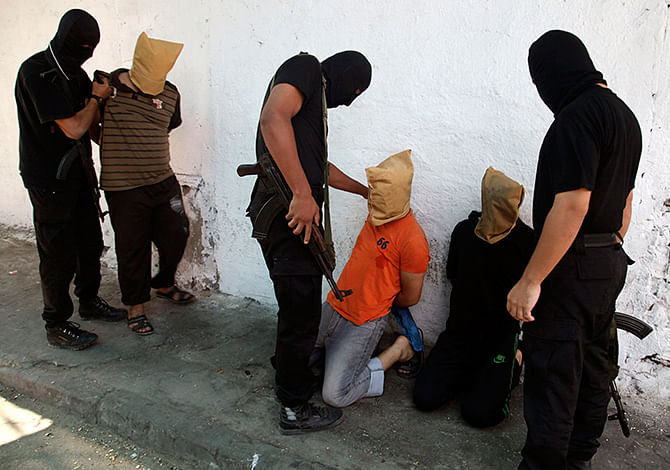 Gaza gunmen killed 18 alleged spies for Israel on Friday, including seven who were lined up behind a mosque and shot after midday prayers, in response to Israel's deadly airstrikes against top Hamas leaders.
Two of those killed were women, according to the Palestinian Center for Human Rights, which called for an immediate halt to what it said were "extra-judicial executions."
Hamas media portrayed the killings as the beginning of a new crackdown, under the rallying cry of "choking the necks of the collaborators."
The Al Majd website, which is close to the Hamas security services, said suspects would now be dealt with "in the field" rather than in the courts in order to create deterrence.
The Hamas-run Al Rai said the same punishment would soon be imposed on others.
The killings came a day after an Israeli airstrike on a house in southern Gaza killed three senior military leaders of Hamas.

Earlier in the week, another strike killed the wife and two children of Mohammed Deif, who is in charge of the Hamas military wing. Deif's fate remains unclear.
Friday's events began with the shooting of 11 alleged informants at the Gaza City police headquarters in the morning. Of the 11, two were women, the Palestinian rights center said.
Later in the day, seven men were killed outside the city's downtown al-Omari mosque as worshippers were wrapping up noon prayers. Several dozen people were near the mosque at the time, said one of the witnesses, 42-year-old Ayman Sharif.
Sharif said masked gunmen lined up seven people against a wall. A piece of paper was affixed above the head of each of them, with his initials and his alleged crime.
Sharif quoted one of the gunmen as saying the seven "had sold their souls to the enemy for a cheap price" and had caused killing and destruction.
The commander of the group then gave the order to the others to open fire form their automatic rifles. He said the bodies were collected by an ambulance and the gunmen left.