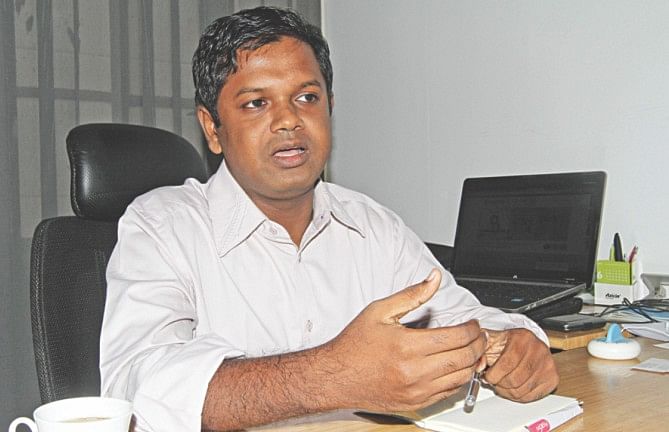 A quartet of BUET graduates has successfully proved that a lack of capital cannot hold back true entrepreneurial sprit.

It was in 2006, with little capital but a pocketful of belief that Raisul Kabir started Brain Station-23, a software company.

Today, that company is valued at around Tk 20 crore and last year, generated revenues of around Tk 8 crore and won the HSBC Export Excellence Award 2013 in the small and medium enterprises category.

“We have big dreams for Brain Station-23,” Kabir, now the chief executive of the company, recently told The Daily Star in an interview.

The company's application portfolio include: CITY Bank Touch Application, ROBI intranet portal, Incepta Mobile Sales Force Automation and AB Leave Management system. It also provides outsourcing service to its global clients such as British Telecom and Congral in the US.

Kabir, who owns 50 percent stake of Brain Station-23, said his company has been registering a robust growth since its inception.

It all dates back to 1999, when Golam Mohiuddin and Kabir became friends. In 2000, Kabir was working on web technologies and he built an office management application for Mohiuddin's company, Latitude-23.

In 2005, Latitude-23 received a big work order from a US client, and Kabir was hired to help execute it within three months. Even though it was pretty tight, it was well executed.

In 2006, when work orders starting flowing in, they formed Brain Station-23.

“And the baby was born,” said the 31-year-old. Kabir, whose parents were both high school teachers, said he always dreamed of serving the nation by generating new employment. “I may get a good job, but I did not look for one as I want to contribute to the country by creating more jobs.”

During his university life, Kabir did a lot of project work, which boosted his confidence and encouraged him to set up the company; the success of Indian IT giant Infosys was also another encouragement.

The HSBC Export Excellence Award has given the company good exposure, especially in the local market.

The company is now focusing on banking and pharmaceutical sectors for expansion. It has plans to increase its workforce five-fold in the next four years. It now employs around 100.

“The local banks are now procuring a huge amount of software. So, we want to grab this segment with quality software,” he said, adding that development of local software will help the country save large sums of foreign currency.

The work rate charged by the company is either hour based or project based, depending on the service offered, and the applicable business model. Rates can range between $15 and $20 an hour.

The company mainly hires winners of different programming contests, and pays its employees from Tk 15,000 to Tk 150,000 a month, depending on the job profile, he said.

Local software and IT vendors exported services and products worth $124.72 million in fiscal 2013-14, up 22.71 percent from the previous year, according to data from Export Promotion Bureau. Bangladesh was recently recognised by AT Kearney as the 26th best destination for IT outsourcing globally. AT Kearney, a leading management consultancy firm with offices in more than 40 countries, included Bangladesh in its Top 50 Global Services Location Index for the first time recently.

In terms of cost competitiveness in outsourcing services, Bangladesh ranks first, according to the study.

Bangladesh Association of Software and Information Services set a target to earn $1 billion from such exports and create 1 million professionals in five years.

The global market of business process outsourcing and IT services stood at $952 billion in 2013, of which or $304 billion was BPO based, according to HfS Research, an American consultancy firm.

Over 700 companies, including software developers and outsourcing service providers are now in operation in Bangladesh, but 10-15 companies are doing well, he said.

Kabir, who is also the co-founder of Biponee.com, a leading e-commerce site in Bangladesh, urged the government to improve road connectivity in the capital to take the industry forward. “Traffic jams are increasing our operating costs significantly.” Kabir graduated in electrical and electronic engineering from BUET and did his MBA from East West University in 2011.