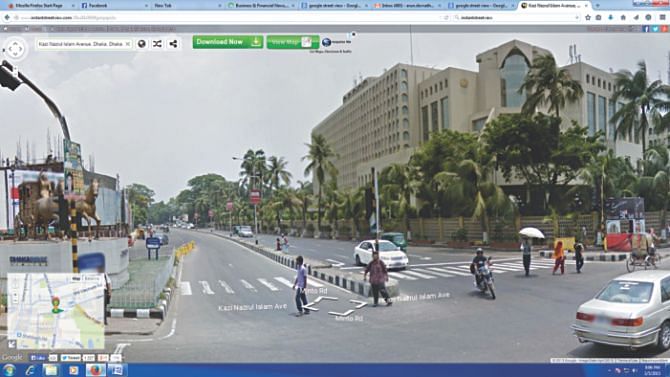 People from around the world can now roam around the streets of Dhaka and Chittagong online, as Bangladesh became the 65th country to enter Google Inc's Street View service yesterday.

The search-engine giant's street view imagery allows anyone with an internet connection to view 360-degree panoramas of roads within Dhaka and Chittagong with all nearby establishments clearly visible.

Additionally, 42 notable sites across the country like the parliament building in Dhaka and Kantaji Temple in Dinajpur were also included in the database.

“It is a new way to explore the streets as people can see places in detail and navigate easily,” Ann Lavin, director of Public Policy and Government Relations at Google Asia Pacific, told reporters at Sonargaon Hotel in Dhaka.

“We hope street view imagery portrays Bangladesh with a fresh perspective,” she said, adding that it also helps raise awareness on the country as an emerging destination for visitors from around the world.

Google Inc looks forward to bringing more of Bangladesh online in 'the next months,' she added.

Through the street view service people can explore the cities and tourism sites on their computers, tablets, and smartphones as if they were physically present.

With support from Bangladesh Government's access to information (a2i) programme, along with other ministries, Google introduced the first street view imagery of Bangladesh on Google Maps, a free map-based service from Google

A shop-owner in Old Dhaka, for instance, could provide links to Street View images on their website and social media to help customers locate the shop more easily, he said.

Hotels in Dhaka can also show prospective guests what the building looks like from the street, and give them a sense of the surrounding neighbourhood.

“The Street View project is an interesting one, because it shows how ICT technologies can have benefits across a range of sectors, from business to tourism to education,” said Obaidul Quader, road transport and bridges minister.

Through Street View, people will be able to get a panoramic view of the country's leading archaeological and tourist spots, said Khorshed Alam Chowdhury, civil aviation and tourism secretary.

Easy access is a unique feature of this service, said Janina Jaruzelski, USAID mission director to Bangladesh. “Launching such a service will help Bangladesh turn its digital vision into reality.”

As part of its privacy policy, Google blurred human faces and license plates of vehicles in the imagery to render them unidentifiable.

Google Street View was launched in 2007 for several US cities and has since expanded to include 65 countries, and around 3,000 cities and rural areas worldwide.