The Yinon Plan and the role of the ISIS 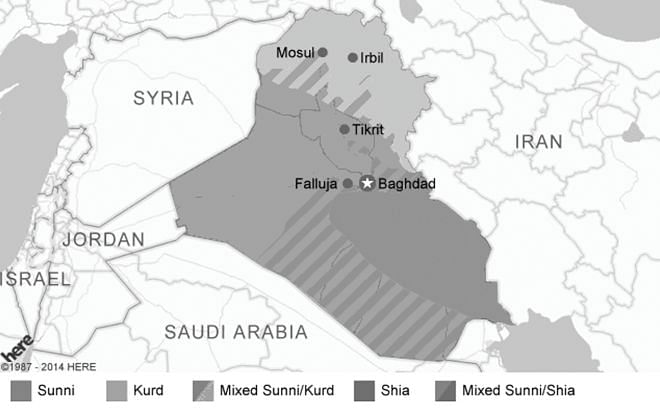 LIVE messages and pictures of Sunni ISIS fighters dressed in Islamic attire circulated through social media network such as You Tube ostensibly authenticate the hostile agenda of the ISIS fighters to dismember Iraq by carving out a Sunni Islamic Caliphate stretching from Syria to the western Sunni heartlands in Anbar Province in Iraq. The usage of the state seal of the Prophet Muhammad (SAW) on the ISIS flag as well for its Coat of Arms seemingly validates that ISIS are Sunni fighters.
The rapid march of the ISIS towards Baghdad and its swift takeover of Mosul and Tikrit, and Baiji oil refinery, Fallujah and Ramadi in the Anbar Province, and seizure of border crossings into Syria and Jordan are presented by political analysts as a “civil war” fought along sectarian lines, Sunni Arabs versus Shiia Arabs. Added to this is the ethnically different Iraqi Kurds who have enjoyed semi-independence under the US patronage and are now on the verge of declaring complete independence from Baghdad.
Through the powerful lenses of the Western media houses, the global village watch with horror and agony the unfolding blitzkrieg in Iraq carried out by ISIS fighters calling for the creation of the Islamic State of Iraq and Syria also referred to as the Islamic State of Iraq and al-Sham (the Levant). The picture thus being unfolded to the world is that Iraq is on the verge of being divided into three small states: Sunni Iraq, Shiia Iraq and an independent Kurdistan.
Similar to the deceptive US-UK call for the invasion of Iraq on grounds of Iraq possessing weapons of mass destruction, western media reporters are now engaged in misleading and deceiving global public opinion as to the real perpetrators of this ISIS project. Like the western manufactured “Arab Spring” in North Africa, the ISIS project is a deception at its worst designed with hateful intentions to cause horrendous regional mayhem and destruction with military might for the creation of a “New Middle East” with Israel as the regional power in control of the region's oil, gas and water resources.
The present ISIS lightning war in Iraq is the creation of an illusion to initiate the fulfillment of a pre-planned agenda of the West in close alliance with Israel to redraw the map of the entire region as the “New Middle East.” This is the Yinon Plan at work, which aims at the balkanisation of the Middle East and North Africa (MENA) Region into smaller and weaker entities or states in order to ensure the dominant position of Israel in the region and the control of its oil, gas and water resources by the US-Israel nexus. In the process of balkanisation, the facets of ethnicity, religion and race from within the region are engaged for destruction, causing alarm for the UN and international military intervention to “protect innocent civilians,” thus paving the way for the ultimate achievement of the designed goals of creating the “New Middle East.”
The chaos, destruction and devastation caused by the ISIS in its process of establishing the Sunni Islamic Caliphate in Iraqi and Syrian territories is the realisation of the intended policy of the US and the West to change public perception that the “War on Terror” was never a war waged by the West against Islam but a “war within Islam” along religious, ethnic and sectarian lines in the Islamic world. The Islamic State of Iraq and al-Sham's Sunni Caliphate project coincides with a longstanding US agenda to carve up both Iraq and Syria into three separate territories: A Sunni Islamist Caliphate, an Arab Shiia Republic, and a Republic of Kurdistan.
The division of Iraq into three separate entities had also been strongly advocated by US Vice-President Joe Biden. Biden's heritage and an analysis of his electoral constituents will help understand better his support for the fragmentation of Iraq under the Yinon Plan.
Iraq, which was not only the most mechanised and urbanised state in the Middle East, possessing the largest oil reserve in the Middle East (tapped and untapped), but also cohesively united as a state with diverse ethno-linguistics and sectarian groups was the biggest strategic challenge to the plotters of this balkanisation plan.
The destruction of Iraq began from within the region with Iran as the adversary. The eight-year war between Iraq and Iran left both the oil rich countries economically exhausted and militarily weak. In order to thwart the Khomeini Revolution, Iran, to the proponents of the Yinon Plan, became the logical choice from within the Middle East region to fight against Iraq. Although Iraq has been represented to the world as a Shiite-majority state, Sunni Iraqis form the majority since the Kurds in Iraq are also Sunnis. The existence of the two major ethno-linguistics groups, the Arabs and the Kurds and the two major sectarian groups within the Islamic faith, the Sunni and the Shiia in Iraq allowed the balkanisation planners to foment tensions leading to total disintegration of the social fabric of the Iraqi society since  the US-UK led invasion in 2003.
Prior to the invasion, Iraq enjoyed a 50-50 Shiia-Sunni marital alliance and the Kurds enjoyed autonomous power within the Iraqi state under President Saddam Hussein's leadership. The no-fly zones imposed by the West in northern Kurd Iraq and southern Shiia-held regions between 1993 and 2003, following the first Gulf War solidified the lines of demarcation for the impending three divisions of Iraq to be finally carried out by the ISIS. The intentions of the US-Israel nexus for the implementation of the Yinon Plan was clear to Saddam's regime before the impending US-UK led invasion of Iraq in 2003 as expressed by the former Prime Minister of Iraq, Tariq Aziz: “This is not regime change but regional change.”

The writer has taught at the University of the West Indies, Mona Campus, Jamaica.