The politics of 1971
The daily star

In Bangladesh, history has become party politics. The source of this attitude may be in the nature of the political leadership that we have had since 1972 who feel anything is justified if it leads to political power.

Of the three main politically contesting histories, each party now has its own version. It means the AL, the BNP, and now the Jamaat version of 1971.

We, in general, also refuse to contest obvious factual oddities and occasional absurdities because we are afraid that our national consciousness may be challenged by what is found. In the last 36 years we have lost our confidence to face history.

Given such weak nerves and even weaker intellectual muscles, how can people expect to cope with the demands of history, both in writing and practice? The failure to write a credible history of 1971 has allowed parties who opposed the birth of Bangladesh to control the political destiny of the country. The case of Jamaat-e-Islami is a typical one of inadequate academic history writing becoming a political problem.

Civil war and other wars 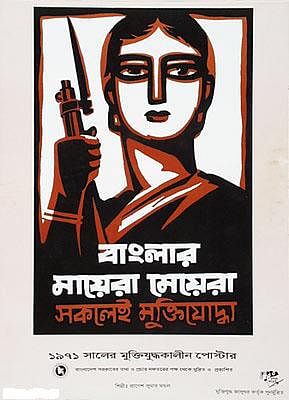 Whether it is the Indian historian Sarmila Basu or a Jamaat or any other pseudo-Islamic extremist cadre, 1971 is usually a "civil war." The argument is, Pakistan was one country and both were warring sides on a shared soil. Another argument is that the war was between 1ndia and Pakistan, and Bangladesh was a hyphenated part of history, a sub-text. Even Benazir Bhutto while talking to us -- Mohiuddin Ahmed, Muntasir Mamoon and I when we visited Pakistan -- called the Bangladeshis partisans "Indian supporters" or perhaps something more.

The civil war argument doesn't work because Bangladesh's Independence Day was March 26, 1971. Bangladesh came into being as a state on that day and the Pakistani forces became an occupation army. So the question of civil war doesn't arise: it was a war between two states, one occupying another.

Pakistanis may claim that this was a civil war but it is neither logical nor can be proven in law. The "civil war" argument applies only if people refuse to accept March 26, 1971 as the day of Bangladeshi independence. Those in Bangladesh denying this are denying the fact of Bangladesh coming into being. Maybe this argument can be made in Pakistan, logical or not. In that case, one may also argue that those who wish to argue the Pakistan way may go there.

Another argument is that it was an Indo-Pak war and so all were part of one mega-war. This argument arises from a lack of knowledge of the events, and not just of this war but any war.

Rarely, if ever, is a singular war fought. In the case of 1971, several wars were being fought, but the primary war was fought between Pakistani and Bangladeshi forces. It is not "patriotism" to say so -- but all wars flowed from this war. This war was followed by other wars, including the Indo-Pak war which was the by-product of the Bangla-Pak war. It couldn't have arisen without the event of March 26, so everything that happened after March 26 was contingent to this principal war.

There were several subsidiary wars going on within all the sides. Bangladesh forces also fought the Maoists, who were also fighting two wars, one against Pakistan and another against the Awami League. There were internal wars happening, like the factional wars within AL leadership and India, which had its roots in Cold War Politics. There was conflict between India and Bangladesh, part of which was manifested by the raising of the Mujib Bahini manned by Bangladeshis, but controlled by Indian military. Many Mujib Bahini members even fought with the general Mukti Bahini members as well.

The US and the USSR were opponents as well and both worried that they would be dragged into a wider South Asian war. In the final days, they even had a show of armed fleets in the Indian Ocean. The ethnic militant groups of North-East India fought the central Indians because of their own nationalism. The ethnic minorities of Bangladesh fought their war with Pakistan, the repressive state, although they were outside the Bengali nationalist movement which spawned the war.

In other words, there were many wars, but the principal war was the Bangladesh-Pakistan war. It was also the first war. Every war and conflict that occurred in that time period was "subsidiary," or a result of that war. This war was between two states, Pakistan and Bangladesh, which became a state on March 26, 1971 and was occupied by Pakistan till December 16 of that year. This, in a nutshell, is the history of 1971.

There is no scope for calling this a civil war, nor for locating the Bangladesh war within the Indo-Pak war, even if the forces of some parties were much bigger. Size has nothing to do with facts. 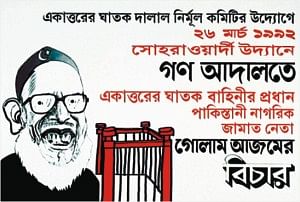 Those who were with the forces supporting Pakistan army were enemies of the Bangladesh state. How does one identify them?

Pakistan set up "Peace Committees" all over the country to help fight the Bangladesh forces that they called "miscreants." From the village level to the national level, these committees represented the spirit and will of the Pakistan state. Anyone who was a member swore allegiance to Pakistan and promised to do everything to sustain the state. Similarly, the Razakar Bahini was also set up to counter the Mukti Bahini and help the Pakistan army reach into the deep of Bangladesh.

Although today the term Razakar has become generic term meaning "traitor," in 1971 it was a job analogous to that of the Ansars of today. Most of the people who joined came from the poorest class and looked upon being a razakar as a job which apart from a salary also allowed them to loot and steal with impunity. Several historians have noted that most of these razakars were not ideological at all, and most joined as an economic and not an ideological choice.

Razakars were also the largest band of organised criminals in 1971. In areas where they were active, public hatred towards them was very high. In most cases, in most villages, most razakars were dealt violent justice, from lynching to head shaving to beating, etc after the war was over. In case where rapes were reported, the punishment was expectedly severe.

However, in many cases, the Razakars also supported the Muktis in lieu of money, because they were rarely if ever ideological. They were criminalised by war, but were not supporters of Pakistan, though their actions were in compliance with the objective that Pakistan had adopted.

The rural Peace Committees were manned by people who were village-centric conservatives, often more interested in controlling the village than fighting the war. This control had been upset after the nationalist movement peaked and Sangram Committees were formed, which were mostly led by AL partisans. So while the village Shanti Committees were mostly opposed to the Sangram Committees, they were half supporters of Pakistan at best, and were more part of village politics. Many actively supported the Pak army and Razakar actions. Support to the Bangladesh forces was also there because the village fighters mostly came from the same rural elite.

In all cases, the members of the political parties supporting Pakistan lent a violent hand, and these were people who didn't need to be coaxed into supporting or opposing. They did it by choice and they belonged to the parties who were defeated in the 1970 elections, the traditional cross-Pakistan parties like JI, ML, PDP, etc

Both the Shanti Committees and the Razakars were in the end located within the Pakistani defensive strategy applied to an occupied land. All those who supported Pakistan should have been subjected to a review after 1971. Maybe the state did not do or was unable to do so because of compelling pressures. However, at the grassroots level, social scrutiny by the villagers and leaders was made, and in many cases action taken. Even if the central authorities and the national political leadership were unable or unwilling to act against collaborators, many villages did. In many cases, such reviews led to violent acts which are inevitable in such cases.

The other source of their commitment to Pakistan was participation in the by-election of 1971. This by-election threw out the results of the 1970 election which was the legal basis of the independence declaration of Bangladesh and legitimacy of all acts thereafter. Those who became members of the National Peace Committee and participated in the elections acted against Bangladesh state in strengthening the state of Pakistan. On that ground, all the parties and all the people involved should be guilty of acting against the state of Bangladesh.

Such people or parties should not be part of the political structure of a state whose inception they opposed and who even supported the actions of a military force to kill that state. It is argued that Bangladesh was not fully formed and the forces were "rebel" forces. This point is not valid because that state came into existence on March 26, 1971 and the rebel forces were actually the national force.

It was for this reason that all the opposing parties were banned in 1972 as they were enemies of the state, in the clearest sense of the term. This statement is not an emotional one at all, like those who are feeling enraged at what Jamaat leadership and supporters have said about the 1971 war. It is simply not possible to constitutionally tolerate those who had opposed the circumstances of its coming into being and hope to succeed as a state. Where else are such forces tolerated?

We need facts but do we want to look for them?

The issue of war crimes is irrelevant here because that depends on personal liability and specific law, backed by evidence. That may or may not exist because nobody has bothered to collect evidence all these years. Before embarking on another example of a misguided legal attempt, like the effort to strip Gholam Azam of his citizenship, Jamaat and other anti-Bangladesh parties should be banned on the grounds of not having wanted Bangladesh in the first place. They have no legal right to participate in Bangladeshi politics.

The reason they were allowed is because our quality of politics is so bad that our leaders consider allowing anti-Bangladesh parties into politics as a simple way to manage state politics. It could only happen in a state that politically fails almost at inception.

The engine of failure roared loudly when one-party rule was established and gained momentum when the constitutional pillars were taken away and increased even further when one religion was made the state religion. They are indicators of failure, because the constitution was tampered with on grounds of personal or a party political benefit. Maybe the entire leadership associated with such decisions deserve to be tried in a constitutional court.

The case against individual leaders is another matter and its best to set up a committee to peruse and explore existing evidence. It is no use screaming, if nothing can be proven in court; no use saying that three million were killed if there is no credible survey to say how many really died and how.

Had the events around Bangladesh's birth and history turned into a rational discourse and not an issue of religion and taboo, we not only would have known more, but we would not have had the leaders who opposed the birth of Bangladesh flourish in that very country.

It is interesting that Jamaat or Muslim League, which never had a chance in East Pakistan politics from 1947 to 1971, have now shared state power in Bangladesh. We don't mind that, apparently, because our rulers and their parties have violated the constitution so many times in letter and spirit. Within that framework, the Awami League, the BNP, and the Jamaat-e-islami are blood brothers.

Afsan Choudhury is a journalist writing for Bangladeshi and South Asian publications.

This article was previously published in December 2007